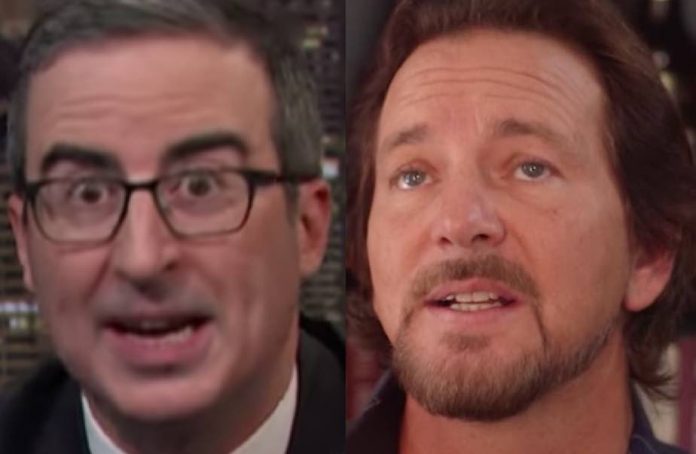 John Oliver discussed Eddie Vedder and Pearl Jam’s battle with Ticketmaster on his HBO show on Sunday. A Ten Club fan reported, “John Oliver’s main story tonight was about the corruption in the ticket business. Pearl Jam got several good mentions. He mentioned they took on TM in their prime. He also mentioned (and complimented) the 2020 tour was set to have transfers at face value with no up charges.”

Oliver also sadly said, “If Pearl Jam can’t defeat Ticketmaster in the 90’s, no one can.”

Pearl Jam frontman Eddie Vedder sent out a personal birthday message and a teaser of the song for President Jimmy Carter was revealed. This was done to raise money for charity Farm Aid and Boys & Girls Club. Vedder was =seen in a video clip playing a Beau Hannan Guitar. Check it out below:

This was done to raise money for charity (@FarmAid and Boys & Girls Club).

In a new interview, Sixx has elaborated, saying his beef is mainly because he believes that Vedder is a typical rich rock star who acts like an ultra-chill ’90s grunge dude. During the interview with Brazilian entrepreneur Paulo Baron and music critic Regis Tadeu, Sixx was asked about his feuding with Vedder. Sixx immediately made it clear that he isn’t against grunge, and that he actually championed the genre back in the day:

“I remember going to MTV with Nevermind before going out with Nirvana, and me and Tommy were there, and we were told to see that band and there were bands coming up. I remember having the cassette tape, I think they were demos, or early Rage Against The Machine recordings, and I remember telling everyone about that. We were never afraid to embrace the changes in the song because that’s the idea behind the song. If you listen to Too Fast For Love and then listen to The Dirt, you feel like it’s the same band that grew up so we never had a problem with that.”