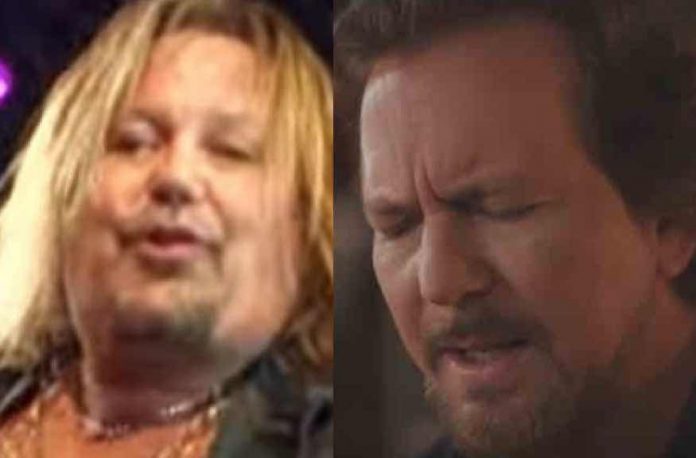 Pearl Jam frontman Eddie Vedder recently spoke his heart out and itt was about no other band than Motley Crue. Vedder went on to do a rant on the Crue, and heavily criticized the band which dominated in the 80’s. Previously, Eddie Vedder’s rant about retirement was also reported.

The Pearl Jam frontman recently joined in for an interview with the New York Times. He spoke about the time he used to work in San Diego loading gear at a club, and revealed that he would go to shows unwillingly where the bands performed that monopolized late-’80s MTV. He bashed the metal bands of the contemporary period and Motley Crue’s “Girls, Girls, Girls”, which he ‘hated’.

“You know, I used to work in San Diego loading gear at a club. I’d end up being at shows that I wouldn’t have chosen to go to — bands that monopolized late-’80s MTV. The metal bands that — I’m trying to be nice — I despised. “Girls, Girls, Girls” and Mötley Crüe: [expletive] you. I hated it. I hated how it made the fellas look. I hated how it made the women look. It felt so vacuous.”

He revealed that he was relieved when Guns N’ Roses gained prominence. Eddie Vedder further revealed which factor he appreciates:

“Guns N’ Roses came out and, thank God, at least had some teeth. But I’m circling back to say that one thing that I appreciated was that in Seattle and the alternative crowd, the girls could wear their combat boots and sweaters, and their hair looked like Cat Power’s and not Heather Locklear’s — nothing against her. They weren’t selling themselves short. They could have an opinion and be respected. I think that’s a change that lasted. It sounds so trite, but before then it was bustiers. The only person who wore a bustier in the ’90s that I could appreciate was Perry Farrell.”