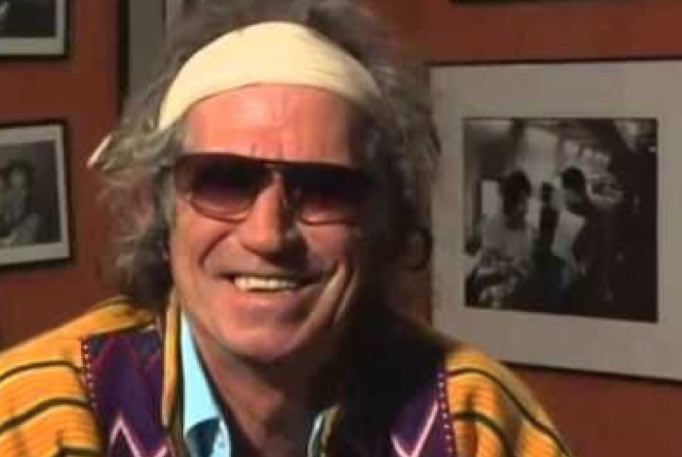 The Rolling Stones guitarist Ronnie Wood’s ex-wife Jo Wood has revealed that she ‘begged’ Keith Richards to not use drugs around her mother, and Richards told her that he wanted to introduce her mother to drugs ‘gently.’ Wood told the story in a new The Times interview.

When her mother, Rachel, visited her in LA, Wood begged Richards to hold back. “ ‘Keith,’ I said. ‘My mother has never seen a drug in her life. Please don’t.’ ‘I’ll break her in gently,’ he growled.

“Rotten sod! Afterwards, my mum came to me horrified and said, ‘Josephine, Ronnie doesn’t take drugs, does he?’ ‘Of course he doesn’t, Mum,’ I said. ‘Not my Ronnie.’ And then she spotted the straw behind Ronnie’s ear.”

Keith Richards’ bag full of drugs at a hotel was revealed earlier this week. Wood also said she built “a little club room with a notice on the door saying ‘Jo’s Club’, and I’d have drinks and joints ready for Ronnie and Keith when they took a break.”

Wood gave the interview to promote her new photo book full of past The Rolling Stones pictures, but she said the project doesn’t really make her new husband that uncomfortable.

“Somebody said to me the other day, ‘How does Carl feel about this book?’ And I said, ‘He’s so supportive.’ He had a life before me. I had a life before him, although mine was extraordinary. He’s fascinated because he’s never done a drug in his life. And he has enough confidence in himself …”

A The Rolling Stones member was recently asked if Keith Richards really ripped him off. NorthShores2 recently posted on IORR.org asking about the NME show from 1968. He asked, “Just wondering: whats the date of this show? Whats the circumstances (what does NME stand for)? I understand this is their only concert in 1968 excluding the Circus . . . any photos, any footage, any recording? Could this be the holy grail of bootlegs?”

Gazza responded, “12th May 1968. New Musical Express. They only played two songs (JJF and Satisfaction). Their performance wasnt televised and only a short clip was included on the Southern TV (ITV regional) show ‘Time for Blackburn’.

The holy grail of bootlegs? There’d be quite a few in that category, personally, but anything from 1962-63 would be way ahead of it, plus the El Mocambo shows from 1977 and the Stu tribute in 1986.”

The Stones only permitted their 1964 and 1965 performances to be broadcast. In 1966, both themselves and the Beatles performed and obviously both acts wanted to be top of the bill. So, they decided to have the show in two parts – with the Stones closing the first half and the Beatles the second. Neither act allowed their performance to be broadcast.” You can read the Jo Wood interview at The Times.