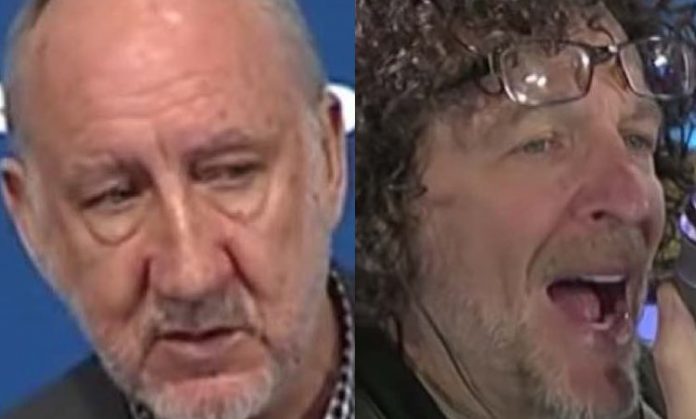 Howard Stern claimed that Pete Townshend said The Who were going to retire and breakup, but ended up lying, in an episode of his show this week when he was discussing his limo driver Ronnie Mund’s plan to retire a year from now.

MarksFriggin.com recapped: Howard said he’ll bet that all of his friends are related to the show somehow. Ronnie said he met a lot of friends through Kurt. Howard asked how he met Kurt. He asked if he heard him on the show. Ronnie said sure but that doesn’t mean that they’re not going to be his friends anymore.

The Who revealed Paul McCartney jealousy a few weeks ago. Howard said Pete Townshend is back on tour again after announcing they were done again. He said he has no place for him on the show if he retires. Ronnie said he gets it. Howard said go dig your own grave. He said he can throw out that puppet in a year. Fred did his Ronnie Puppet thing and had him knocking and ringing the bell at Kurt Busch’s house. He wasn’t answering the door. Howard said Kurt doesn’t care about retired Ronnie who hangs out by his pool all day.

After the break they played Deep Purple’s ”Hush” as they were coming back. Howard talked the song up like a top 40 DJ.

Howard jokingly said he remembers when he was young and 3 days from going to Vietnam and the song came out. He said he and his crew would sit and listen to this before going out on their detail. He said he’d put on his headphones and shoot and kill the enemy. Howard said Deep Purple helped him kill. He said when he was on leave he’d fuck to this song. He said many prostitutes heard this song. He said he has kids all over Vietnam. He said his nickname was Scumbag over there.

Howard said what a great song this is. He asked if they’re in the Hall of Fame. Robin said yes. Howard said she’s right. He said they’re the class of 2016. Howard asked what other songs they’ve done. They mentioned Smoke on the Water and Hush.

Howard said Richard Christy was talking about the Christmas music he listens to around this time. He said his wife has to go into another room because he annoys her with his playlist. He said he likes heavy metal and this is what he plays. He said Richard likes this heavy metal band and played a clip. Howard said this is what Richard listens to. Robin said he listens to noises during Halloween too. Howard said the art work for that song is a Santa shooting an elk’s head off with a shotgun. He said the band is called Coughandf**k. He said he thought he was doing shtick but he really listens to this. Howard Stern leaked a sad photo of Motley Crue’s singer a couple of days ago.