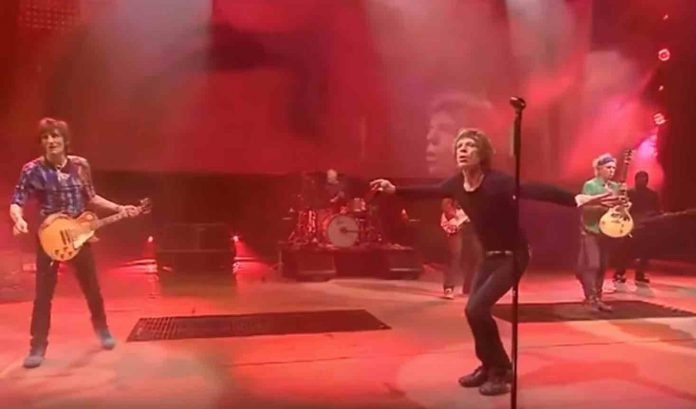 Keith Richards has such a wicked sense of humor, that he once told a nurse at a hospital that he was the father of bandmate Ronnie Wood’s newborn daughter. Keith Richards ‘passing out’ in a photo was recently revealed.

Ronnie’s ex-wife Jo Wood wrote in a new Daily Mail piece, “I found Keith fascinating. His sense of humour was, and is, brilliant. We’d go days without food or sleep, then we’d realise we were starving and Keith would say, ‘Let’s go to Fouquet’s’, a really posh restaurant he loved on the Champs-Élysées. We must have looked such a motley crew.”

“After a few months we bought a place in Mandeville Canyon and Keith moved in there too. He realised there was a little guest house in the back and thought, ‘That’ll do for me.’

The day that Leah was born, Keith came to the hospital as well. The nurse asked which of Ronnie and Keith was the father and they both said, ‘I am.’”

Keith Richards was recently spotted with a bandmate’s ex-wife. Fans on IORR.org recently discussed The Rolling Stones using screens at shows. Padre69 said, “When was the first time The Stones used screens in a concert? Leeds-82 seemed to have one, but was that the first time? I don’t remember seeing any in LSTNT-movie.”

SittinonaFence commented, “I believe the first screens that were utilized were in 1975 at the Capital Center in Landover, MD. In-house video with images projected on a screen in the center of the arena. New Orleans 1978 also had screen. A poor-quality video circulates of the N.O. show. I also remember the Carrier Dome shows in Syracuse 1981 had a screen above the stage. Probably the Pontiac Silverdome 1981 shows also had screens. Not sure about the Seattle ’81 shows that were earlier in the tour and were indoors. VideoJames may wish to weigh in here?”

Spud chimed in, “The quality of screens wasn’t really up to the job prior to the VL tour, since when they’ve gradually become the focus of the stage design, big enough and bright enough to provide a satisfying experience for everybody in attendance.”

CaptainCorella said, “Nonsense. I remember going to see them at Wembley long before that. There was a big screen above the stage and they started with it blank, and then between some (early) numbers Mick got it turned on and it was showing a TV channel broadcasting a football match (possible World Cup, but someone will know). After a few moments of that it was changed to a relay of the on-stage stuff.

And it was fine. (Alright, it may not have been 4k super HD OLED, but WTF it was a vast screen that helped us all to see the show much better!)”

You can read the full Jo Wood piece at the Daily Mail.