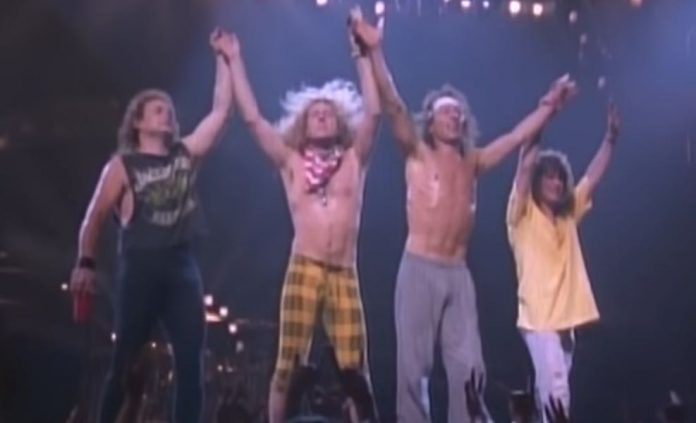 Former Van Halen singer Sammy Hagar was recently spotted in a hilarious photo with his face down wearing a Santa hat after having too many drinks next to Michael Anthony and Vic Johnson, and now Hagar is sarcastically blaming Anthony for what happened in the photo. Hagar wrote on social media, “It’s all Mikey’s fault.”

B.jacob.smith commented, “It looks like Santa Sammy might be a little lit, one sign is sunglasses on indoors. Thanks for all the great music Sammy Hagar I wish you and your family a very merry Christmas and a beautiful new year. Catchup.” Hagar responded, “You got that.”

Ditchmusic chimed in, “There’s no way this is real I know one thing about Sammy, he doesn’t pass out.” Hagar responded with a crying laughing emoji.

Greta Van Fleet revealed a heartbreaking Eddie Van Halen photo last week. Hagar posted another photo with his lovely wife, writing, “Me and my bride clowning it up like teenagers in a photo booth #coupleshavingfun #photobooth #adultsactingliketeenagers #youshouldseetheotherones.” He added, “Fantastic tell them to carry Sammys Beach Bar Rum it’s with Southern Glazer Wine and spirits.”

Acb5150 commented, “Celebrating my wife’s 50th Bday and our 25th Anniversary this Saturday at the CW Cantina in Vegas. Our first trip to Vegas. Any suggestions?”

Hagar responded, “The food is fantastic! Try the coconut rum margarita or with the rum it’s so damn good! Wish I was there I’d buy you a drink. Ps as for Jason the manager and show him this post comment from me ‘hi Jason I want to buy these two a round of drinks for their anniversary’ sammy.” A Van Halen member angered Michael Anthony fans with his remarks last week.