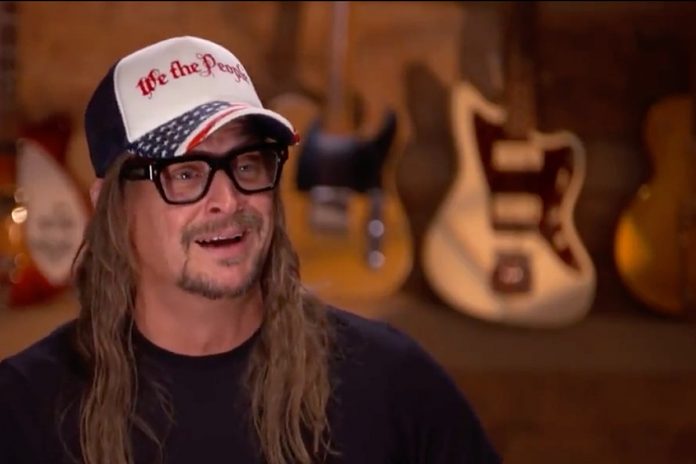 Kid Rock wore a shirt referring to Rep. Adam Schiff as an offensive name in a new photo with Donald Trump Jr. as seen below.

Kid Rock was trending on Twitter once again on Wednesday morning. Many will remember that Kid Rock was recently trending due to popping off on an expletive-filled rant about Oprah Winfrey, bragging about being “uncancellable,” or refusing to abide by safety protocols while on tour.

For once, he doesn’t seem to be the one making things problematic. The “We The People” singer was falsely attributed to the quote: “Bibles aren’t allowed in schools anymore but are encouraged in prisons. Perhaps if kids were allowed to read the Bible in school, they wouldn’t end up in prison.”

Even though it was very clear that the Tweet did not come from the artist, the tweet quickly went viral, with nearly 30,000 likes and several thousand retweets since Tuesday night.

But while most of the people who engaged with the tweet celebrated the sentiment, more than a few liberal accounts likewise got sucked into the narrative as well by expressing disbelief that Kid Rock has ever read the bible or calling the 51-year-old “MAGA trailer trash.”

Although, it’s clear to see why a lot of people thought it could have come from Kid Rock. Rock posted the Kermit the Frog-themed meme to Donald Trump’s Truth Social on June 30th. He stated: “If you’re anti-gun, you don’t get to celebrate the 4th of July,” the meme begins. “You would have never fought back. Enjoy your pride month. P*ssy.”

The dig at LGTBTQ+ Pride comes after a video surfaced last June of Rock hurling a homophobic slur at fans who were recording him during a concert. Shortly after, the artist addressed the backlash by saying the same slur again. “If Kid Rock using the word f**got offends you, good chance you are one,” he said, before assuring us he has “a lot of love for his gay friends.” If that’s true, he’s got a funny way of showing it.