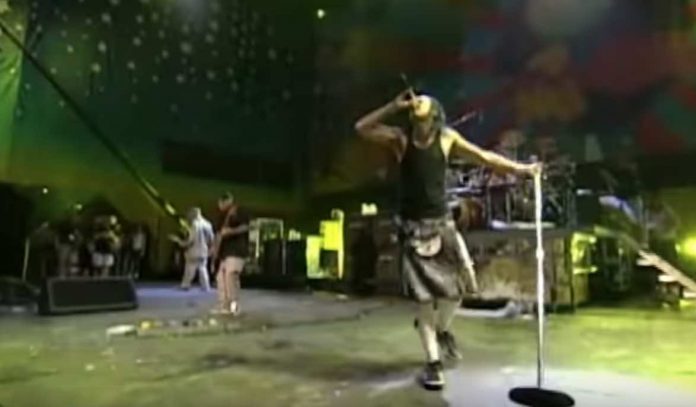 Former Korn drummer David Silveria revealed to RadioactiveMike Z in a new 96.7 KCAL-FM Wired In The Empire interview that the band spent huge money on booze when recording Follow The Leader.

“When we did Follow The Leader, it was pretty much complete chaos every day and every night when we recorded that record at a studio in the [San Fernando] Valley called NRG. We rented a house in Hollywood. We basically had parties every night after we would be in the studio. And there was a fenced-in backyard, and everyone would be drinking beer and we’d tell everyone to throw their beer cans off the balcony in the backyard. By the time we were done recording the record to move out of the house, I think the entire backyard was covered in three feet full of beer cans. Yeah, it was pretty ridiculous. I think one of our crew guys, we actually paid him to go… He took all the beer cans and recycled them and made a bunch of money. And I think, honestly, if I remember correctly, in our budget, we spent $85,000 on liquor and other things. But I think we spent about 85 grand doing that record just on booze and extra stuff.”

“I remember going on stage in ’99 at Woodstock and looking out at the crowd, and as far as my vision would take me, I could see people until they just disappeared into nothing — there were so many people,” he said. “I think it was 275,000 [people]. They had two sets of sound systems. There was a millisecond delay, so when everyone jumped, they jumped in a huge wave, starting in front of the stage and going to the back. You can go on YouTube and see the overhead cameras and see all that stuff online — it’s pretty amazing. But being in front of 275,000 people, that was probably the biggest rush of it all.”

Silveria said Ice Cube and Cheech Marin coming to the studio as Korn recorded Follow The Leader was a ‘really big deal.’

“Back then, our band was still pretty new, so when Cheech Marin came in the studio or Ice Cube came in the studio, we were kind of a little starstruck, because of just how much N.W.A. had been an influence for me using 808s and those hip-hop-ish kind of beats in our music,” David said. “So I think having [Ice Cube] come in and work on the record, that was a really big deal.”