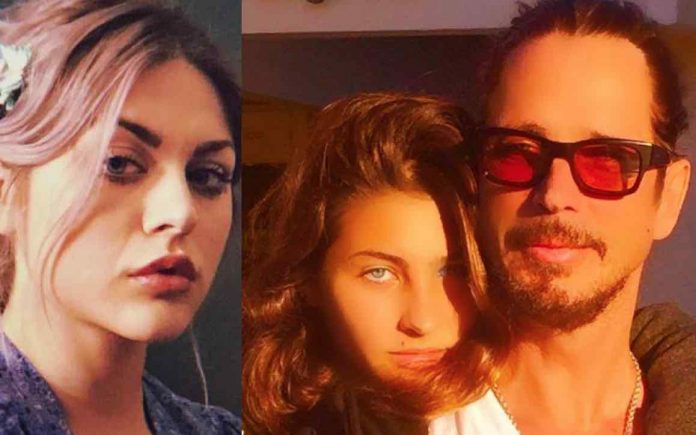 Kurt Cobain and Courtney Love’s daughter Frances Bean Cobain reached out to Chris Cornell’s daughter Toni Cornell a couple of days ago, around the 2-year anniversary of Chris Cornell’s death. Cornell and Kurt Cobain both died by suicide in 2017 and 1994 respectively. Both left behind daughters, with Cornell also having an older daughter, Lily Cornell Silver.

Frances Bean responded with two hearts and a butterfly emoji.

Chris Cornell’s widow Vicky Cornell wrote on the 2-year anniversary of her late husband’s death, “We will continue to speak your name out loud, over and over. We will share your stories – our children will share with our grandchildren, memories that no one can take away, stories that keep our love for you and of us alive. We will pay tribute to your life and legacy. We will honor you forever…. #loveyouforever #chriscornell #noonesingslikeyouanymore.”

Actor Josh Brolin wrote, “This (below) is part of what I wrote for Chris’s funeral, part of what I spoke. Two years later I revisit that moment I wrote it remembering, understanding, that with time things will morph and my perception change. But it still feels like it was yesterday though. I’ve accepted it, sure, but we’re still talking, curious about the vicissitudes of this life. We were — on the phone, or eye to eye — always in awe and curious about the whys: it’s ticks and snakes, it’s color and atom bomb mercuriality. Its quiet. Its quiet. —- ::: ‘Everywhere I look, I think I see Chris walking toward me: tall, a long mane of lion curls, a slight smile under either a beard or a pencil thin mustache.

Every time I look at my phone and it says Christopher and I think it’s all been a dream, something imagined, that you create subconsciously so that it can never be realized.

Every time I think of Chris, it’s like he’s in front of me, telling me what he’s been doing: his kids, Vicky, a fair they went to, or how much fun he had when we all went karting, a song he’s mining the magic out of.

This is the thing that never goes away, the impact someone has on you. It will ebb and flow with time in its intensity, but it will always be there until someone is doing it about you.’ :: I miss you, buddy. I miss you deeply. ❤️❤️❤️”

You can call the National Suicide Prevention Lifeline at 1-800-273-8255, and find a local Narcotics Anonymous meeting on NA.org.