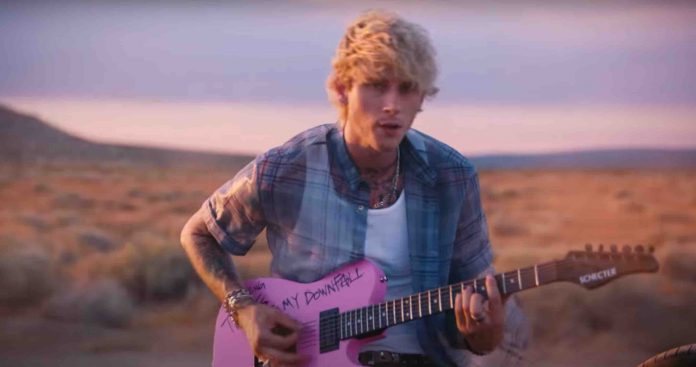 Machine Gun Kelly has been in the news for what seems like forever since he and Eminem went blow for blow at each other through a rap feud which saw Machine Gun Kelly dropping a diss track which was followed weeks later by Eminem taking shots back at the younger rapper. It was Eminem who (by popular opinion) would win the battle which would see a disappearance by Machine Gun Kelly until he would switch up his genres and go down a more rock oriented route. With the new outlook on music, Machine Gun Kelly also honed into his inner rock star as he wanted to audition to be David Bowie in the 2020 biopic, ‘Stardust’. Unfortunately, getting violently high would prevent this.

‘Stardust’ was a 2020 biopic chronicling the life and career of David Bowie. It was directed by Gabriel Range and starred Johnny Flynn as Bowie. But before Flynn got the role, Kelly wanted the opportunity to portray the icon himself. With Machine Gun having some acting under his belt, he was ready to make the move, but the audition would never see the light of day.

“What’s funny is that in real life, four or five years ago, I did audition for the Bowie biopic. I think it was called Stardust. But I never sent in my tape,” Kelly once said in Interview magazine.

To Machine Gun Kelly, this wasn’t a fly by night role. This is something he wanted badly.

He closed: “I smoked the wrong strain of weed and rewatched it and I was like, ‘I’m too insecure. I can’t do it.’ I did the bolt. I did the Ziggy Stardust. I had a dialect coach help me master his exact way of speaking. I did all of that. Then, I did the audition, was about to send it in, and I was smoking this weed in Europe and rewatched the tape and was like ‘Oh, I can’t send this,’”

Even with Machine Gun Kelly going from rap to rock to acting, he has influenced a sound in modern music with one of our favorites below to give a listen to.

Special thanks to Cheat Sheet.