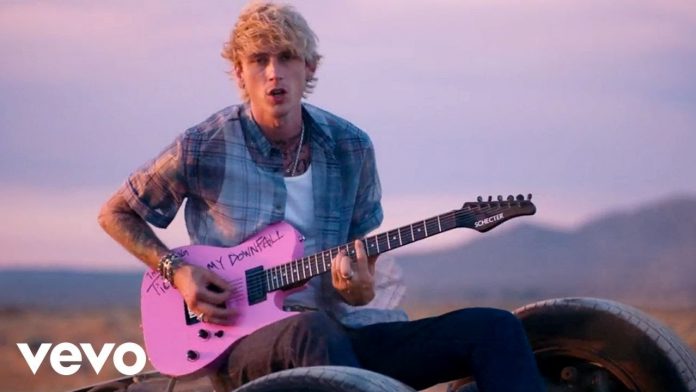 Is Machine Gun Kelly the newly crowned “prince of pop-punk”? While that might be heavily debated, the controversial vocalist very well could be setting his sights on a new rock sub-genre as he played a snippet of the classic System of a Down track ‘Aerials’ on a recent edition of The Howard Stern Show. Stern seemingly was impressed by going ‘You have some band’ after the short performance was done. It is unclear, whether or not, it will be getting a proper studio release anytime soon.

Was Machine Gun Kelly caught faking a recent performance? In other news concerning Machine Gun Kelly, or MGK if you want to be particularly hip, during a recent interview with Billboard, Kelly discussed transitioning from rap to rock and how he ‘earned’ success in the pop-punk sub-genre.

Kelly would state: “Dude, I was fucking loading up the van with our drums and amps in 2010, driving to Indiana and Chicago, playing Warped Tour. I can tell you the fucking Wi-Fi codes to venues in Blackfoot, Idaho. Can you say that s*** as a band,” he added.

Machine Gun Kelly is currently bracing for a busy and lengthy 2022 as he will be playing many well-known music festivals in the United States, such as Lollapalooza in addition to a sprawling arena tour this year.

Continuing MGK would say: “The 2010s was great for singers and rappers, and I was part of that. But I think we needed something else: We needed an instrument. Kids come up to me like, ‘Dude, the first time I ever saw someone play guitar in concert was at your concert — and now I take guitar lessons.’ ”

He concluded: “Never once was I like, ‘I need to be touted as the greatest guitar player,’” he continued. “[Rock] needed a defibrillator. Who cares who gives it, just as long as that mother****er doesn’t die?”