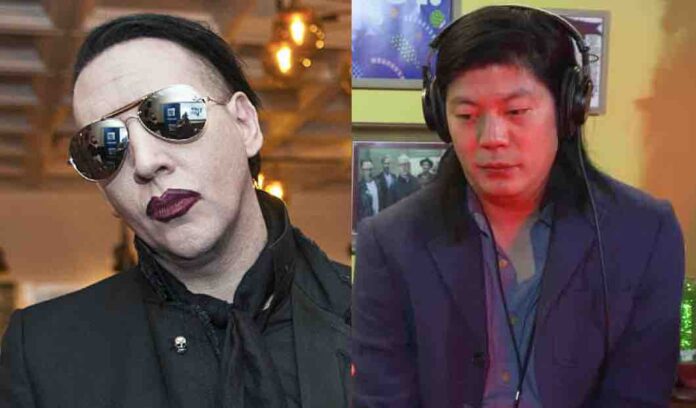 Marilyn Manson has been blasted anti-Asian after he called James Iha from The Smashing Pumpkins a ‘zipperhead’ to Johnny Depp in a text message. It is to be noted that James is married to the sister of Manson’s wife.

It has been noted that several unsealed court documents from Johnny Depp and Amber Heard’s high-profile defamation trial reveal shocking texts exchanged by the actor and Goth rocker Marilyn Manson.

The alleged text says about Manson’s ex-girlfriend Lindsay, “And she filed a police report because that zipper head james iha and her poor fat mom want to steal my money.”

According to Marca, several alleged Johnny Depp fans paid $3,000 to open the undisclosed court documents from the case. Although they intended on finding out more hard evidence against Heard, the documents revealed something completely different.

In documents reviewed and posted by the New York Post, Depp and Manson had an alleged text conversation in 2016. In the conversation, Manson had allegedly drew comparison of his current wife Lindsay Usich, to Amber Heard.

Manson wrote: “I got an amber 2.0. Lindsay just puled an amber on me…please delete”

The reference was of 2016 when Usich asked for a restraining order against Marilyn Manson after she claimed that he had drugs at home and would “beat her up.”

To this, Johnny Depp replied: “I been reading A LOT of material on that and sociopathic behavior…it is f***ing real my brother!! My ex-c—t is g*dd**n TEXTBOOK!!!”

Following this, Manson made reference to a 2016 incident when the police were called to Johnny Depp and Heard’s house, stating: “I got a serious police amber type scenarios with L’s (Lindsay Usich) family. I’m f***ing stressing. I don’t know if you are back but I need asylum somewhere because I think the cops might be headed my way.”

Amber Heard’s lawyers had mentioned during the trial that Depp and Manson would consume drugs together. The Pirates of the Caribbean star himself admitted that he used to do “pills” with Manson. He said: “Yes, we drank together and we’ve had cocaine together maybe a couple of times.”

My god, I didn’t understand why people were saying the first text from Marilyn Manson was anti-Asian, until I learned “James” is James Iha from The Smashing Pumpkins, who is married to the sister of Manson’s wife and then I looked up what zipperhead means. 😦 #unsealed https://t.co/0728QigWtK pic.twitter.com/2Uua6av4Fh