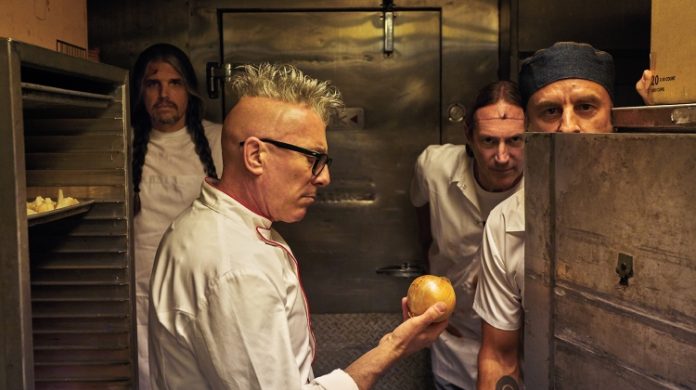 Along with A Perfect Circle, Puscifer is Maynard James Keenan’s most beloved and acclaimed side projects. Along with Carina Round and Mat Mitchell the group has been putting out hits pleasing fans since 2007. Puscifer’s latest album, Existential Reckoning debuted at number 7 on the US Billboard Top Alternative Albums chart with over 11,000 album-equivalent units, of which 9000 units were pure sales.

During a new post on Instagram, discussed not only playing with Puscifer at the legendary Greek Theater in Los Angeles, California but revealed that his Tool bandmates, Justin Chancellor and Danny Carey were in the building watching the set as well. Keenan captioned the photo, which can be viewed below and stated the following.

“Playing w Puscifer in front of a packed house at the Greek Theater was a dream come true, but the cherry on top was seeing Adam Jones watch the whole show from side stage. No pressure. Justin [Chancellor] n Danny [Carey] in the house as well”

Adam wrote, “June 12th 2022 ⁣⁣masked up in the wings of the ⁣⁣Greek Theater stage 👀 ⁣⁣
Watching some Merkin named Dick ⁣⁣performing with Puscifer ⁣⁣from the best seat in the house ⁣⁣🤘🏽 Fantastic show.”

In other news regarding Tool, who recently apologized to fans for this shocking reason, the aforementioned frontman discussed his problems with social media in an interview with AZ Central. Credit to the outlet for the following.

“I don’t want to be the old dude blaming the new stuff, but that really is part of the issue. Social media technology. And the isolation of being able to voice every uninformed opinion that you’ve ever had or come across. I don’t know if there’s any way out until somehow it all gets unplugged for a reset.

He continued: “It’s very comfortable from your living room to run your mouth,” he says. “But when you actually have to see the situations in real-time or have to talk to the person across from you, we tend to be a bit more civil. You might be the big tough guy, but eventually, there’s a bigger tougher guy who doesn’t agree with you. So at some point, you’re sort of going, ‘OK, maybe we should be cool to each other instead of running our mouths.'”