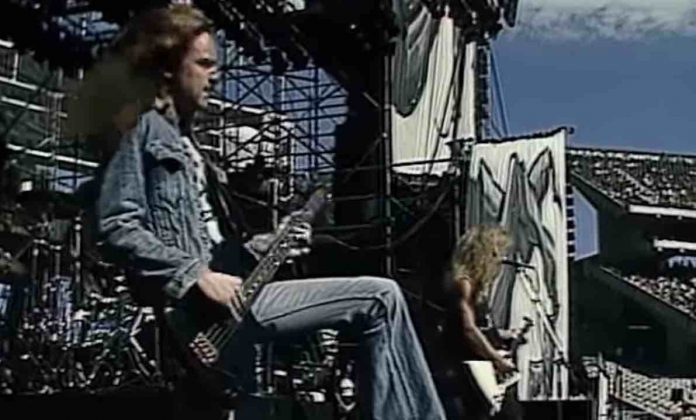 It’s truly amazing how we are as people. We often only focus on the morbid and dreary. That’s why horror movies sell so heavily. A lot of people often wonder what the last words of someone were. You can even search for that online. Many fans of Metallica have wondered what the last words were of the very stoic, Cliff Burton.

Cliff was simply a monster on the bass and fans of Metallica have known this for forever. In fact, Cliff’s bass work is regarded in the heavy music scene as some of the best bass work that anyone has ever heard.

Metallica used to tour frequently with Anthrax back in the day. The two bands really meshed with one another back then and fans of either band seemed to really enjoy the other band opposite to their favorite band at the time. It was really a treat to see the two together. The night skies were dark as both bands filled out crowds all over the world. Then the darkest day happened – the accident that lost Cliff.

The whole band, friends of the band, fans, and the music world in general mourned as news began to spread about the awful accident that took the life of Burton. Metallica has spoken on this many times. In fact, the band will occasionally still bring it up at shows to show their respect for a good friend.

Anthrax have also spoken up about when the incident happened. Frank Bello from Anthrax connected heavily with Burton as both were great bassists for their respected bands. Recently, Frank Bello opened up about the ordeal as he has a new book on the way.

Via the help of Ultimate-Guitar, Frank Bello said: “There are no words. We were young, touring every day, you get used to the same people hanging out together every day Anthrax and Metallica. I would watch their show every night, I always loved what Cliff was doing, talking with his bass. Cliff was innovative, he always thought outside the box as a bass player.”

Bello then gets deeper and darker with it as he goes on about what the final words were between the two bassists: “There was this little saying we had, ‘Hey, maybe I will see you later…’ The last vision I have of Cliff was – his bus was going and Cliff was walking out the door and I said to him, ‘Hey, Cliff, maybe I will see you later…’ Then he pokes his head from out the bus and says maybe I will. And that is the last vision from him I remember, and it still haunts me.”

Morbidly, one has to wonder if Cliff thought anything about those last words as his last moments were near. A very meaningful and heartfelt RIP to Cliff Burton.