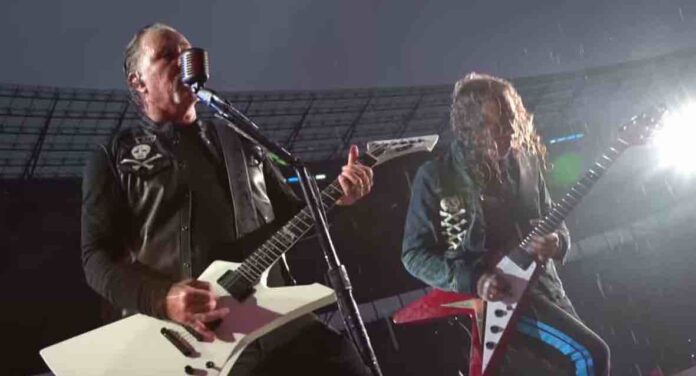 Metallica guitarist Kirk Hammett is a popular guitarist who is proficient in his work but recently messed up at a concert. He botched the intro to the band’s classic ballad “Nothing Else Matters” during the group’s set at the Boston Calling music festival.

After jamming Boston’s “More Than a Feeling”, Kirk launched himself into the Metallica tune. Still, he messed up the iconic intro to the track. This made him to fall to the floor in embarrassment and issue a good-natured apology to the audience.

Kirk Hammett apologizes to the fans

He told the audience, “Sorry, guys. You’re so kickass. I got distracted by how kickass you are,” and restarted the song, which was the second-to-last track of Metallica’s 16-song performance at the three-day event.

Now, one of the fans in attendance, who was standing in the front row at the show uploaded a video where he confesses his guilt for loudly screaming during the moments before Kirk had his mishap.

“Nothing Else Matters” is one of the most popular songs from Metallica’s mega-selling 1991 self-titled album — also known as “The Black Album” — which was re-released last September as a remastered deluxe box set via the band’s own Blackened Recordings. The song reached position No. 11 on the Billboard Mainstream Rock Tracks chart as well as top-ten positions on many European charts.

Last August, the band released the music video for “Nothing Else Matters” surpassed one billion views on YouTube. It was the first track of the band to reach the milestone.

The “Nothing Else Matters” video, which was uploaded to YouTube in October of 2009, was directed by Adam Dubin and edited by Sean Fullan and is made up of clips from the 1992 Metallicadocumentary “A Year And A Half In The Life Of Metallica”. The clip is perhaps best remembered for a scene where Lars Ulrich throws darts at a poster of Winger frontman Kip Winger.