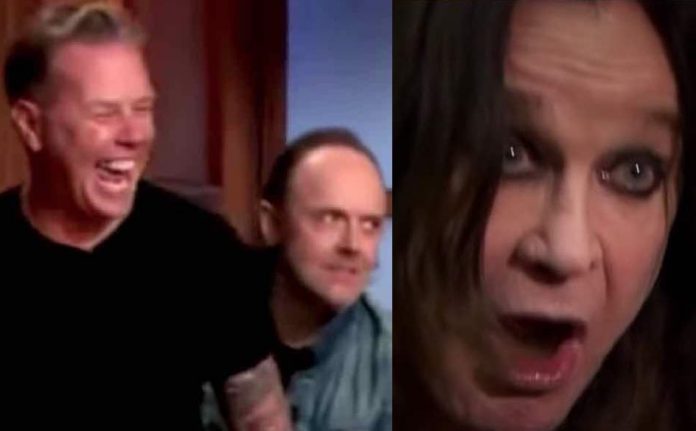 Metallica drummer Lars Ulrich shared a photo of legendary Black Sabbath frontman Ozzy Osbourne from their ‘crazy days’ in a new Instagram post. You can view the photo below.

“Cool to be back in Wichita, Kansas after way too long..

This is where we started the Puppets tour 33 years ago on March 27th 1986 opening for Ozzy, which also was our first U.S arena date ever…fuck yeah, crazy days!!

Osbourne told Rolling Stone in 2017, “I took Metallica on tour with me after the release of Master of Puppets. The album was a milestone for the band and for heavy metal.”

Metallica honored Black Sabbath at the Rock and Roll Hall of Fame in 2006, and James Hetfield got emotional after the induction. “It was like, ‘Oh, no, I’m going to start crying,'” he told Rolling Stone. “I’d never known it until I had to access all those emotions in front of that crowd, but it just goes to show how much Sabbath mean.”

Ozzy Osbourne has been forced to cancel more shows due to orders from his doctor.

“Following Ozzy’s recent postponement of UK and European tours due to ill health, the Download Japan team has been wishing for a speedy recovery in the hope that he would be able to perform at the festival. Unfortunately however, Ozzy has been forced to cancel his appearance at Download Japan 2019 on doctor’s orders. We apologize to his fans, and anyone inconvenienced by this news.

Ozzy, who has been suffering from pneumonia, has left the hospital, but has been told to continue to receive treatment at home for a period of six weeks. We wish Ozzy all the best for a full and speedy recovery, and a comeback show in Japan.

We are currently working towards the announcement of additional acts for the festival. Thank you for your patience. We kindly ask for your understanding that refunds will not be issued in the case of lineup changes.”

Sharon Osbourne recently blasted the National Enquierer for saying she has Tourette’s syndrome.

“How the fuck did these mother fuckers find this shit out?”