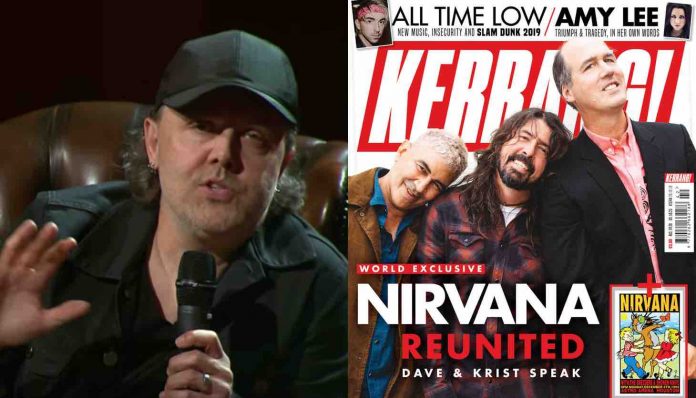 A new clip has been released from Sunday’s upcoming episode of It’s Electric on Apple Music with Metallica drummer Lars Ulrich interviewing Joan Jett about her Nirvana reunion performances. Ulrich seemed impressed by the performances, and called “Smells Like Teen Spirit” the ‘greatest music anthem of the last 25 years.’

Lars Ulrich: Sure. Speaking of extra special, Rock and Roll Hall of Fame 2014. Nirvana’s being inducted and you sing with them one of the greatest anthem of the, speaking of anthems, that’s a-
Joan Jett: Yeah.
Lars Ulrich: That’s a subtext of this whole episode. The greatest music anthem of the last 25 years. Smells Like Teen Spirit.
Joan Jett: Yeah.
Lars Ulrich: So the first time that the three members including Pat who you obviously have a relationship with from back in the Germs days.
Joan Jett: Yes.
Lars Ulrich: And the first time they’re playing together since Kurt’s untimely death. You’re singing Smells Like Teen Spirit. You’ve got to walk me through just how did that come about, what’s going through your mind as this is happening? I need to know more about this particular thing, it’s mind blowing.
Joan Jett: I’m trying to remember how they asked me. Because the actual thought of that was another petrifying thing right?
Lars Ulrich: I can only imagine.
Joan Jett: Can you imagine? But how can you say no?
Lars Ulrich: Of course.
Joan Jett: You can’t.
Lars Ulrich: It’s like dare right?
Joan Jett: It is a dare, it was a total dare. But you have to do it, you know. You have to … just hope the rock and roll gods are with you that night you know?
Lars Ulrich: And they were.
Joan Jett: And I was a big fan anyway so I knew the song pretty well. I had not learned it on guitar, so that I had to do. And to sing it at the same time.
Lars Ulrich: Was the first time you played it with the other three guys at the sound check that day or the day before? Did you rehearse somewhere the week before? I mean what are the specifics of this?
Joan Jett: No I believe we just did the sound check the day, whatever that was. The day before or I don’t know if it was-
Kenny: They took over the Gibson studio it was the hit factory. It was a day or two-
Lars Ulrich: There was a rehearsal or something.
Kenny: A couple days out, like three days out we went into that place and they rehearsed.
Joan Jett: How long? Did we pound it out? Did we do it a million times?
Kenny: Maybe you did it 15 times, 10 times.
Lars Ulrich: What was the reaction from the other guys who had not played that song since what? ’94? So almost 25 years. What was the reaction?
Joan Jett: They seemed to be pleased that we got through it you know? I don’t know. I was so into what I was doing.
Lars Ulrich: Right, no, it just seems like-
Joan Jett: Too nervous to look around.
Lars Ulrich: As a fan of yours, as a fan of them, as a fan of music I mean that just sounds like it’s one of those moments that you sit there and go like holy fuck this actually happened. I’m just trying to figure out what-
Joan Jett: We were all grinning ear to ear. I remember looking at Pat, he had a big grin on his face. When I looked at Dave, all you could see was the hair right?
Lars Ulrich: Of course.
Joan Jett: And a smile, but he was going. And Krist had a big smile on his face. So if you can judge from that I think-
Kenny: And they were relieved because Joan was their friend. What if it stunk?
Lars Ulrich: Of course.
Kenny: And they had to say you can’t do it right?
Lars Ulrich: And then thinking back to outside that studio in Santa Monica in 1977 when the Runaways were making their second record.
Joan Jett: Yeah.
Lars Ulrich: And there you were doing this iconic song with Pat.
Joan Jett: Yeah all of it was overwhelming and just … mind blowing.
Lars Ulrich: Crazy.
Joan Jett: It’s just amazing to think that-
Kenny: There were a couple of moments that night. Like when Dave Grohl comes in and goes Joan, you’ll go first.
Joan Jett: Yeah it’s like the dare kept getting more daring.
Lars Ulrich: And then you guys took the Nirvana party to some club somewhere later-
Joan Jett: Oh yeah we sure did.
Lars Ulrich: Invite only and you played another half dozen songs with them or so right?
Joan Jett: Yeah I think I learned eight but maybe I played six, something like that. I believe we did Teen Spirit again there. So I did six.
Lars Ulrich: St. Vincent did a few.
Joan Jett: Yeah Annie, she, I think she learned a few too. So I guess everybody played what they, the amount of songs that they’d learned and there were a couple of guy artists there as well that played.