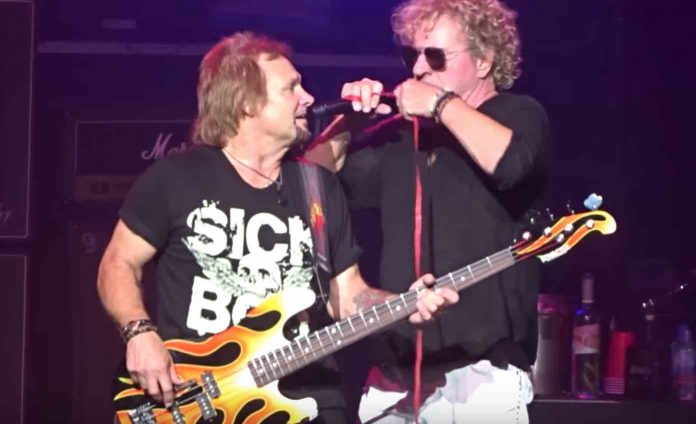 Former Van Halen frontman Sammy Hagar recently filmed a video of himself using a big knife, and Michael Anthony commented and quipped that he was scared he could accidentally cut himself using it. Anthony uploaded a video a couple of days ago where he returned to where he jammed with Eddie Van Halen.

Anthony commented, “Yo Sambo, don’t be slipping up and cutting yourself, we have more shows to do!!!😳😬”

A Van Halen icon reacted to baling rumors after a photo last week. Michael Anthony has been rumored to reunite with Van Halen for a tour. VHLinks‘s Jungle Drummer recently did a deep dive on the last songs to feature the original Van Halen lineup, 1996’s “Me Wise Magic” and “Can’t Get This Stuff No More.”

“My all time favorite studio drum sound for [Alex Van Halen], and [Eddie Van Halen’s] tones sounded terrific on both tunes, and the production is the greatest ever for the band in my opinion. I love that shuffle groove on CGTSNM, especially during the verses like you said. Really like how Alex rides the cowbell during the 2nd verse, then returns to it for the outro. That snare just sounds incredible, especially during the outro. You feel like you’re sitting right next to Alex in the studio. Even his kick drums are up in the mix where they should be. I also like Ed’s solo better in CGTSNM.

That said, I gotta go with Me Wise Magic. Alex’s drumming is awesome. The rolls, the groove of the beat, the double kick during the outro, that syncopation that he and Ed dive into right after the solo before they jump back into the chorus. And the chorus is CLASSIC with the amazing “do you believe” harmonies. And I’d say the outro is the greatest example of Ed using the sustainer so effectively.

I’ve always felt the aggressive nature of the music on MWM, and the groove, sounds like music that fits right in with FW.”

Which song do you like better? Let us know in the comments section! Eddie Van Halen rejecting a big money deal was revealed last week by Sammy Hagar.