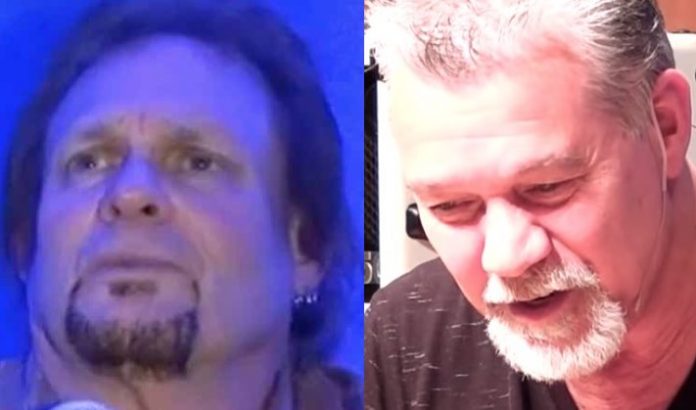 Alternative Nation transcribed Wolfgang’s remarks when asked by Howard Stern on Monday if Anthony and Eddie spoke, “Not directly, but it kind of was in the process. If Dad was still here, it would have been happening, a reconciliation I think.”

Wolfgang also told Rolling Stone he has never spoken to Anthony about replacing him in Van Halen, “Never had too much of an opportunity. That’s kind of what that whole tour [the canceled 2019 Kitchen Sink tour with David Lee Roth, Sammy Hagar, and Michael Anthony] was supposed to be. And then it never panned out. I was really looking forward to speaking with him, and that hasn’t happened yet. I’m looking forward to the opportunity that I have in the future to speak with him.”

Eddie Van Halen insulted Michael Anthony as recently as in 2015 in an interview with Billboard. Van Halen said, “I had to show him how to play [bass].” He added, “He’s not a singer. He just has a range from hell.”

“I have more soul as a singer than he does, and you know, people always talk about Mike’s voice on Van Halen songs, but that’s a blend of Mike’s voice and my voice. It’s not just him.” Michael Anthony reportedly didn’t play on a Van Halen classic.

Wolfgang convinced his father by 2018 to let Michael Anthony return on bass for a tour, with Wolfgang himself opening, and while Eddie was excited about the possibility of a tour, manager Irving Azoff is the one who reached out to him, and they never ended up speaking after the tour fell apart in early 2019 due to Eddie’s brain tumor.

Wolfgang told Carson Daly on The Today Show about grieving his father, “It doesn’t seem like the pain is ever really gonna go away … You just kinda figure out how to carry it a bit better.”

“Some days are better than others,” said Wolf, who explained that his girlfriend has been a huge support, as well has his actress mother, Valerie Bertinelli. “Some days it’s just really hard to get out of bed.”