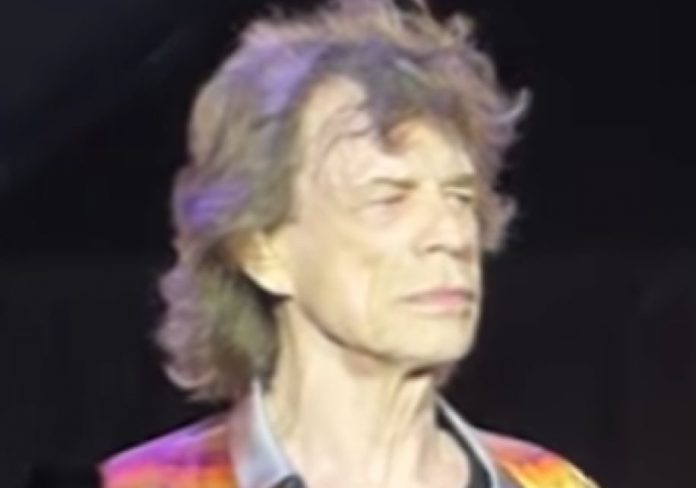 Mick Jagger’s daughter, the graceful and tasteful businesswoman, Jade Jagger continues to capture our attention and our hearts with her stunning fashion choices. Here she is posing in this awe-inspiring green, red, and gold patterned dress that is simply eye-pleasing. The elegant Jagger can be also seen with her famous rocker dad’s girlfriend, Melanie Hamrick. This all took place during an event in London. Hamrick can be seen wearing a tastefully cool black jacket over a matching shirt and a pair of leather pants in the same color
You can get a peek of the lovely Stones’ daughter below courtesy of the Daily Mail and Getty Images

In other news regarding Mick Jagger, the group’s latest studio album, Lonesome and Blue, while a few years now is already considered a classic. Fans took to Amazon to give their review on this bluesy-inspired Rolling Stones album as one user stated the following. Mick Jagger humiliated this The Rolling Stones bandmate.

“I own every studio album by The Rolling Stones plus a slew of other releases on CD and DVD (compilations and, especially, live performances). This is the music of my life. I’ve lived the rock’n roll lifestyle over the decades and paid the price for it, in some ways. I bought this CD months ago but, because I have such an enormous and eclectic music collection, I am only now getting around to listening to it. And, now, I can’t STOP listening to it! Blue & Lonesome is the one ESSENTIAL Stones album since Exile On Main Street was released back in 1972 that you must own! Simply put, this is the ballsiest album musically since that now-classic album. Got it?”

The user continued: “The Rolling Stones have come full circle. Their earliest albums were almost all old blues covers, but there’s a huge difference between what they did back then and what they are doing now on Blue & Lonesome. Experience. Mick, Keith, Charlie, and Ronnie have BECOME the old blues masters and put their musical signatures on these timeless blues cover songs. There’s no ego here. You can hear how much they love the blues. In other words, this is the Stones straight up. No chaser. Song after song. They give it they’re all on every song. Mick hasn’t sung this passionately since, um, I can’t remember. And his harp playing is truly inspired. Ditto for Keith’s and Ronnie’s guitar playing. Their notes ooze the Delta. As usual, Charlie proves once again how irreplaceable he is as the drummer for the World’s Greatest Rock N Roll Band. He has gotten to the point where his drumming is simultaneously noticeable and straightforward on the first listen, but, upon further listens, reveals so many other subtleties too. A true master.”