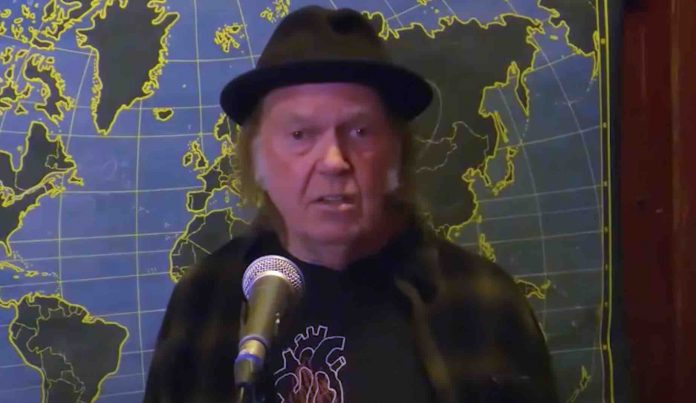 Neil Young had previously told Spotify to delete his music from the streaming service due to their partnership with the long-tenured UFC commentator Joe Rogan. Young has removed his music since then, deleting his letter, and seemingly giving up his battle against Rogan. He was trolled for that move. Previously, Trevor Noah also reflected on the incident.

It seems he still has at least one song left on the streaming platform. The song ‘Campfire’ from ‘Bright: The Album’ which features DRAM is still on the platform, and has not been removed. Joe Rogan interestingly has a cameo in Will Smith’s film ‘Bright.’

Addressing his management team at Lookout Management and Warner Bros, Young wrote: “Please immediately inform Spotify that I am actively canceling all my music availability on Spotify as soon as possible.” I am doing this because Spotify is spreading false information about vaccines – potentially causing death to those who believe the disinformation being spread by them,” he wrote.

Neil Young has now deleted his letter on his website after giving Spotify an ultimatum to remove Joe Rogan, or remove his music. Previously, the long-tenured UFC commentator, Rogan had discouraged young people from getting vaccinated. Rogan was also previously involved in a controversy as he had promoted the concept of taking deworming medication Ivermectin to treat the virus, without providing any medical evidence supporting it.

UFC President Dana White made an appearance on FULL SEND Podcast and he believes Joe Rogan cannot be ‘canceled’ even despite all of the controversies. White reckons that trying to cancel the podcast host is a bit of a fool’s effort.

Here is what he said: “You’re not canceling Rogan. And the thing is with Rogan, he’s a brilliant guy, does his homework, and he knows what he’s talking about,” White started. “And guess what? This is f**king America.  You can have your own opinion about these things, and you can voice them, that’s what this f**king country was built on. And all these little whiny f**king p**sies that don’t like it, too f**king bad. Too bad, who cares?”