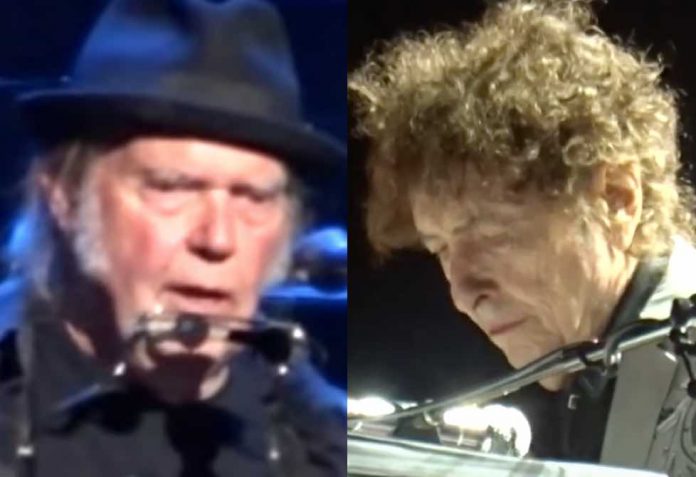 A fan wrote to Young prior to the show on his site, “I see Neil is playing Hyde Park next summer with Bob Dylan. I will be out-priced, so have to miss my dream gig. However, what I am really interested to know is, why Neil would agree to play for Barclays bank? It goes against everything he always says. If you pass this on to Neil,,,, tell him This Notes For You. None of my disappointment stops my craving for more music. 🙂

Neil responded, “This is Neil. I passed it on to myself!! By the time you read this there will be more news on Hyde Park and Barclays. I hope it makes it clear. Read the Times – Contrarian for updates on this story. Thanks for subscribing. ny.”

An official apology was issued, “To Neil and Neil Young Archives subscribers: We take great pride in being the guardian of Neil’s music for over 50 years.

And equal pride in Neil Young Archives, something we believe is a very important work. To our subscribers, we made a promise that they would be the first ones advised of any shows and the first to be able to buy tickets.

To say we fell short of our obligations on the announcement and pre-sales for the Hyde Park show is an understatement and we disappointed a lot of people. We lost focus and the entire team at Lookout Management apologizes for promises not kept to our subscribers.

We have tried to rectify this as best we can by making sure that tickets are available for Neil Young Archives subscribers. I personally really must apologize for this lapse because working as the custodian of Neil Young Archives is very serious to me. Neil’s life’s work has been mine as well. We will make every effort to ensure that this doesn’t happen again.

Young himself added, “Thanks Elliot, We love you. The world’s greatest manager! NEIL.” Michael Jackson’s daughter recently made a sad Bob Dylan claim.