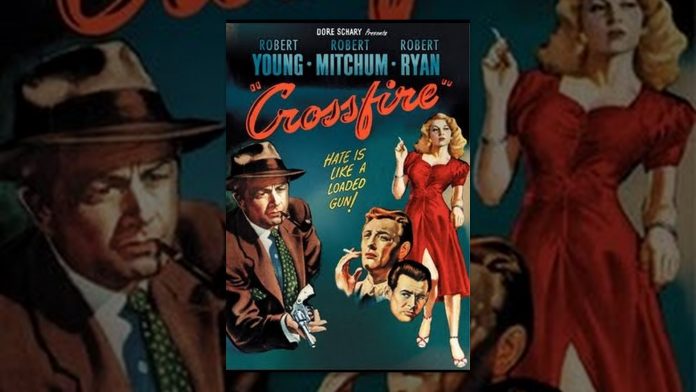 New Hollywood Rewind is a new series on Alternativenation.net where writer Anthony Carioscia takes a look at films from the period known as New Hollywood.For this newest entry we will look at a noir that predicted the New Hollywood movement,called Crossfire.

In the 30s and 40s one of the most popular genres of film was the film noir. Meaning black and styled after a type of French novel, these films were dark detective stories that were really brooding and depressing compared to the colorful and happy big budget films of the time. Examples of iconic film noirs are the Maltese Falcon, Scarlet Street,Laura and the one we will look at , Crossfire.

Crossfire is a 1947 film noir based on the 1945 book the Brix Foxhole. The film stars Robert Mitchum,Robert Ryan and Robert Ryan. The film deals with a major theme of anti semitism. This theme would make the film really relevant today as films dealing with racism are very common and successful nowadays with last years Get Out being a great example. Another way this film would be relevant is that its it’s a low budget film that was up for best picture that being a staple nowadays when it comes to oscar season.  Low budget films being nominated for best picture and even winning it were a staple of the New Hollywood era,as Bonnie and Clyde, a low budget picture being voted best picture is what started the movement decades later. The films dark tone as opposed to the normal happiness of most Hollywood helped with this comparison to.