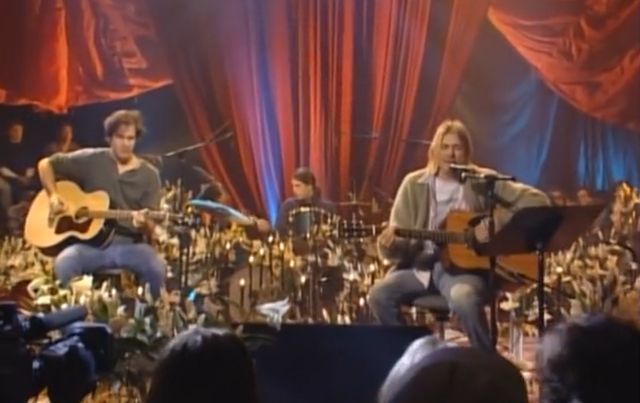 Nearing the finish of another rollercoaster ride of a year for alt. rock’s most popular band, 1993 proved especially fruitful at the very end as Nirvana was in the midst of a heavy promotional cycle that promoted their latest album In Utero.

“All Apologies”/”Rape Me”, released 25 years ago, is the greatest double A-side in alt rock history and it would rank top ten all-time in rock history when we look back at all the great ones since the now mostly-defunct practice of releasing two potential hits on a single is practically dormant now. Both were in Nirvana’s repertoire since 1991, being performed live with different lyrics, but were released together in late 1993.

Looking at the odd dichotomy of the titles next to each other, you’d almost think frontman Kurt Cobain was apologizing for aggressively asking to be a victim.  At any time in rock history, just the song title “Rape Me” would be controversial, and of course it was in this case.  While Cobain already awoke our senses with the harrowing kidnapping story “Polly”, “Rape Me” has Cobain playing “Polly” himself this time instead of the aggressor.

With a loving nod to Mudhoney, Cobain starts “Rape Me” with a choppy, shuffling riff that sounds nearly identical to the intro of that band’s 1988 song “Need” even more so than the common-known inversion of Nirvana’s own “Smells Like Teen Spirit” intro riff.

But is it a confessional or confrontational?  Cobain implies a two-possibility command as the lyric and vocal could be either the character asking the attacker to just finish them off so their suffering can end, or was the character ready to fight back? The way he sings it, he sounds like he’s resided in defeat, tired and abused, but by the end, after an awesome surging chorus of “I’m not the only one”, the song’s energy and Cobain’s realization that others are victims, gives him the strength by the end of the song to scream “RAPE ME!!” in defiance. The crossover moment is when he concludes the bridge with a cold “you’re gonna stink and burn”.  Now Cobain is stronger, sounding more confident the rest of the way on the low, seething verses before the knockout punch of the “rape me!!” coda.

“All Apologies” can be described with one word: amazing. Along with plenty of accolades, it was performed by Nirvana with Lorde at their Rock and Roll Hall of Fame induction, paying tribute to Kurt Cobain. Probably the better of the two songs on the single, the lighter sound also features a dichotomy -a mix of the sunny side of life, and the grave.  As bright and exhilarating as the refrain is (“in the sun I feel as one”), it ends on a frigid realization (“married, buried”) that life still will end no matter how good or bad things are going. It also refers to the public’s reaction to him being with Courtney Love, and how some guys joke about marriage ending all the fun. An early discarded lyric had Cobain singing “what else can I do, I’m in love with you.”

Like “Serve the Servants” lyrics, Cobain is highly conscious of how people view him hence the opening lines: “What else should I be? All apologies,”.  Pinning himself down to being cynical, Kurt sings of those in the herd of sheep who go for anything that’s considered cool on radio or MTV-

I wish I was like you, easily amused [sorry I can’t be as happy as a herd of sheep]

Sunburn with freezerburn [Between a rock and a hard place; hot and/or cold-both will burn him]

Choking on the ashes of her enemy [‘her’ could be anyone or anything but it’s his ashes since he was burned].

With his tragic passing less than a year later, the lyrics began looking like thoughts of suicide when viewed in hindsight, especially within the MTV Unplugged context.

The song is heavenly musically, as every moment has a great hook.  Cobain’s quote about it in Come As You Are-The Story of Nirvana–

I like to think the song is for them [Courtney and daughter Frances], but the words don’t fit in relation to us, the feeling does, but not the lyrics.

It’s commercially accessible in either Steve Albini or Scott Litt’s mix, and the music’s ascending and descending droning cello lines adds drama to Cobain’s fantastic riff. Krist Novoselic and Dave Grohl enter with bursting brilliance on each chorus.  When Cobain’s accidentally accurate and unfortunate prediction of his own immediate future came true by the spring of the following year (married, buried), the rock world looked once again to this song as it grieved, since it was released as a promotional single in early 1994 but this time, it was the more serene and bittersweet Unplugged version.  MTV had been using that performance’s video as the official music video as early as December 1993.

The elongated hypnotic coda was one of our last moments with an active Nirvana as the band rock out with dirty distortion, but as each musical bar passes it gets cleaner and cleaner until it loses muscularity and resides to die.  That coda feels like Cobain’s chaotic life weakening and residing in the fact that he’ll never be happy.  “All in all is all we all are”; like no matter what we strive to achieve, we all have limitations and everything we do both good and bad counts in how we perceive ourselves.  A cautious optimism and permanent pessimism.  If someone wrote that song now, it probably would have ended with “it is what it is”.

“All Apologies” in 2018 with Nirvana members and Joan Jett.

Though double A-sided singles were started in 1965 by the Beatles, and recorded the greatest ever; “Strawberry Fields Forever”/”Penny Lane”.  Nirvana’s look back at an earlier time of promotion didn’t hurt their success.  Neither song negated the other’s airtime, and neither needed a video.  They were enormous once Nirvana branded them into our brains for a lifetime when In Utero was released in the autumn of 1993, both unforgettable for different reasons, and they are still well known today 25 years later as alt rock and grunge’s greatest double-A side.