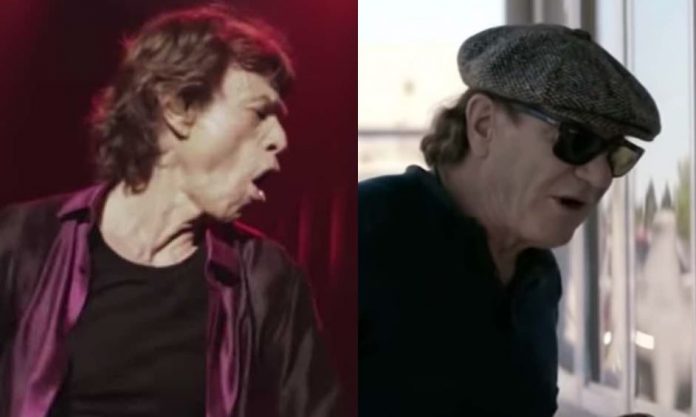 Instead of getting Thunderstruck, AC/DC frontman Brian Johnson had to settle on meeting a starstruck fan at a restaurant in London recently, with an eerie photo of The Rolling Stones frontman Mick Jagger behind him.

Jagger, who is said to be in good spirits, had to postpone several tour dates for heart surgery to replace a value in the singers’ heart. The Rolling Stones were set to go on the North American leg of their tour from April 20th to July 29th of this year.

Brian Johnson of AC/DC also looked lively as rumors of the next AC/DC float out there. The group hasn’t had a studio release since 2014’s Rock or Bust, this would be the first recorded album since the death of a founding member, Malcolm Young. Young tragically died in 2017 after a battle with dementia.

“Where do I start? AC/DC is bar none, with the exception of the [Rolling] Stones, the greatest rock ‘n’ roll band ever. The Stones will always come first for me and then AC/DC. There are no other bands that actually play that brand of really ’50s-influenced straight-up rock ‘n’ roll like AC/DC. I love them for that. I think Phil Rudd is one of the best drummers of all time. So anytime he was not in the band, I was always disappointed. But it’s great that Cliff [Williams is] going to be back because I remember being backstage with those guys at the end of the last tour and him saying that he was gone and that he was retired. So it’s great that everybody’s back, but it’s especially awesome that Brian [Johnson] is back.”