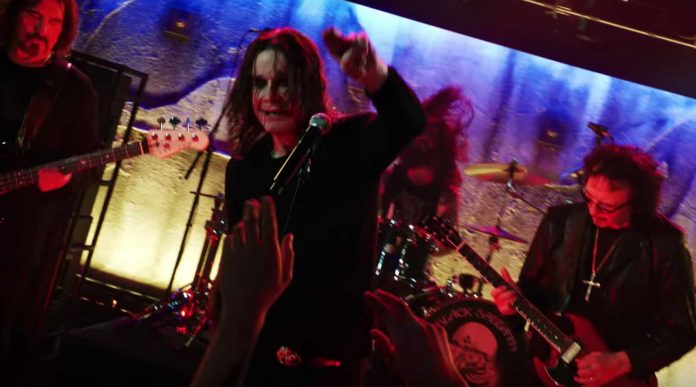 Ozzy Osbourne sadly hates one of his classic Black Sabbath records, according to comedian Jim Florentine, who used to co-host That Metal Show on VH1 Classic. Ozzy Osbourne’s wife blamed a big name for a drug relapse yesterday.

Florentine told Metal Injection, “You know, I would’ve liked to asked either Ozzy or Iommi about … if you look at footage from ’75 to ’78, Iommi was standing in the center of the stage where the lead singer [typically] stands, and then Ozzy was stage left. Like Ozzy would be singing on the side while Iommi was right in the spotlight… it’s just weird if you watch those old Don Kirshner’s Rock Concert performances and even on that ’78 tour…

I mean, Iommi pretty much did those last two records [Technical Ecstasy and Never Say Die!] himself. Everybody else was all fucked up. They even had another singer [Dave Walker] lined up for Never Say Die!, but then Ozzy came back and finished the record. So he wasn’t around for much of Never Say Die!, and he hated that record.”

Ozzy Osbourne revealed how many times he overdosed on drugs earlier this week. Ozzy Osbourne’s wife Sharon revealed on The Talk last month that she had a new facelift.

“It was five weeks today that I had my operation. I had my neck done, my jowls … He kind of pulled it from the top of my head and put an elastic band in it. But everything was just lifted up. So it looks more refreshed.”

“I feel okay,” Osbourne told her co-hosts, who were complimentary regarding her new look. “Still a little bit of pain. But you can’t complain when you wanted to do it.” Ozzy Osbourne made a painful Slash revelation last week.

Before she got the surgery, she announced it on The Talk, and one co-host said she shouldn’t get it. Inaba said, “But I like this face.” Sharon shot back, “You’re just used to it, you’ll like the new one.”

You can read the full interview with Florentine at Metal Injection.