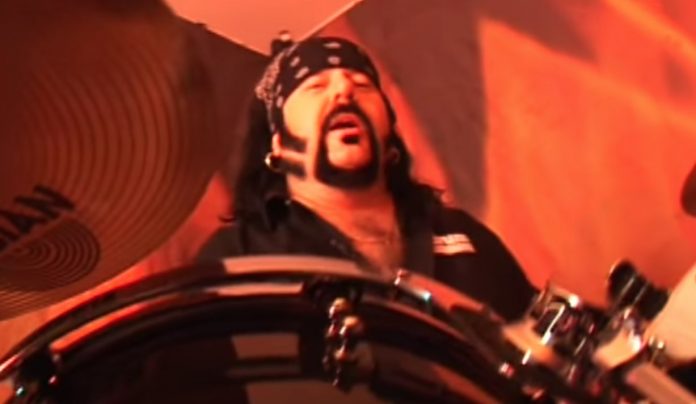 The first photos from Pantera drummer Vinnie Paul’s funeral in Arlington, Texas have surfaced, including a shot of the preparation for the decorations at the service, his coffin arriving, and Disturbed members preparing to see their late friend laid to rest. You can view them below. There will be a public memorial on Sunday.

The death of legendary Pantera and Hellyeah drummer Vinnie Paul “did not appear suspicious” according to the official report of the event recorded by Metropolitan Police officers, the Las Vegas Review Journal is reporting.

According to records of the event, officers were dispatched to a dead-body call at 5:41 p.m. Friday on the 6900 block of Procyon Street (Paul lived on Procyon). Medical personnel were summoned, and Paul was pronounced dead at the scene.

Metro spokeswoman Laura Meltzer added that responding officers did not take such further action as calling homicide detectives to the scene, further indication that Paul was considered medically deceased.

The Clark County coroner’s office has since picked up the investigation into the cause and manner of Paul’s death. The founder of the bands Pantera and Hellyeah died at age 54. Clark County spokesman Dan Kulin said today that official cause of Paul’s death is still pending and would likely take several days to be issued.

This has been a rough week for the Vegas/Dallas metal community and metalheads across the world. Our buddy Patty made the trip from Houston to pay his last respects to Vinnie and sent us a couple photos. We will miss VP at all the shows here in LV and we are glad we knew him. . . . . #RIPVinniePaul #VinniePaul #Metal #Legend #Drummer #DalVegas #Hellyeah #RebelMeetsRebel #Damageplan #Pantera ? @rocker_freak_01

In Dallas! This one’s for @vinniepaul3 @panteraofficial ! Rip brother . @disturbed

Paid my respects to the legend #drummer of @panteraofficial #Pantera Vinnie Paul on my lunch break his funeral is today may he rest in peace #RIP #VinniePaul @971theeagle #bombfactory tomorrow at 3:33pm #DallasTX for a memorial ??