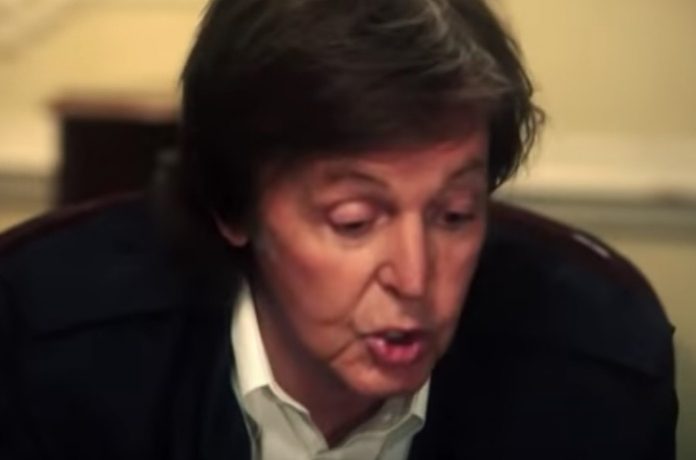 The Beatles icon Paul McCartney was spotted bending over to set down coins on a train track to flatten them in New York. McCartney placed over 10 one-cent coins on the Long Island Rail Road in the Hamptons. He was wearing a hat and t-shirt, and definitely stood out, as it’s usually children who place coins on the track. McCartney later returned to bend over and pick up his flattened coins, which he will now use as guitar picks. Photos were uploaded of McCartney at the train track. McCartney made a bold Leonardo DiCaprio revelation last week.

Paul McCartney recently wrapped up his North American ‘Freshen Up’ tour. BeatlesFanRandy posted on his forums about a San Diego show, “WOW! An amazing concert, event, evening at Petco. Filled with more than 40,000 people! From the first chord of A Hard Day’s Night, the sound took your breath away. It was loud, and clear! Paul’s voice was fine from start to finish. Anyone who says the man can’t sing anymore is just full of shit. And he did not drink any water the entire show that I noticed.

Maybe I’m Amazed gave me chills from beginning to end! The Freshen Up production is stunning, the LED light show and new backdrop films are a mind-blower. The horn players were a wonderful addition to “his band”, and the band was on fire! The 38 song setlist was unbelievable! My 10th McCartney concert, counting The Beatles 50th Anniversary taping I went to, and it was THE BEST EVER! Not kidding, if I could go again next week I would. I have pics and videos to prove it. McCartney revealed what Emma Stone and Olivia Wilde did at a recent show for him.

All the way back on the packed Trolley people were talking about how great he was! That he did not play The Long and Winding Road, Get Back, or Yesterday, was kind of surprising, but they were not missed. He more than made up for it with From Me To You, Love Me Do, and I’ve Just Seen A Face as far as I’m concerned. Live and Let Die was jaw-dropping! And yes, by the way, he did say ‘We’ll see ya NEXT TIME!’ Just an Incredible show!”

The Mirror posted photos of Paul McCartney at the train tracks in New York.