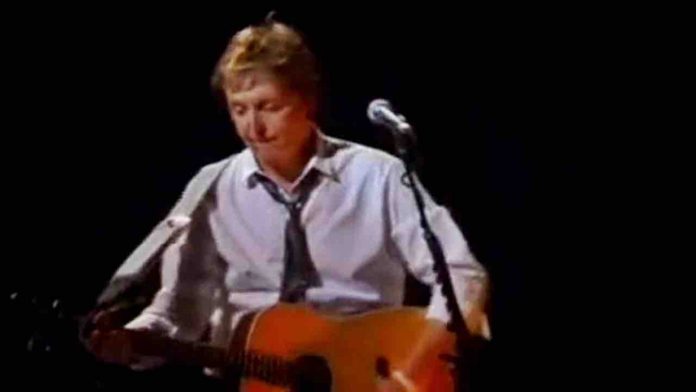 Paul McCartney began his 2022 tour “Got Back” at the Spokane Arena in Spokane, Washington. Notably, he didn’t play the song “Back In The USSR” which has been a staple of his setlist. McCartney said that he skipped the song in support of Ukraine, as he is against what Russia is doing to the country. He even waved the Ukraine flag to show support.

During the concert, McCartney and John Lennon sang together, in the form of a video of Lennon performing “I’ve Got A Feeling” with isolated audio. This was the first time in over fifty years that they performed together on stage. The duet was done with the help of director Peter Jackson, who also created the three-part documentary series “Get Back.” Due to this, he has access to 60 hours of unseen footage of the band’s final moments together.

This way, Jackson isolated Lennon’s vocal track from the footage of the performance, which made it possible for McCartney to sing to it live.

A review of the concert by Inlander says that McCartney’s voice has reached a point where you can hear that he’s old. He understandably can’t belt out high notes anymore, and due to this, you can hear the thinness in certain songs that require vocal prowess, like “Maybe I’m Amazed”.