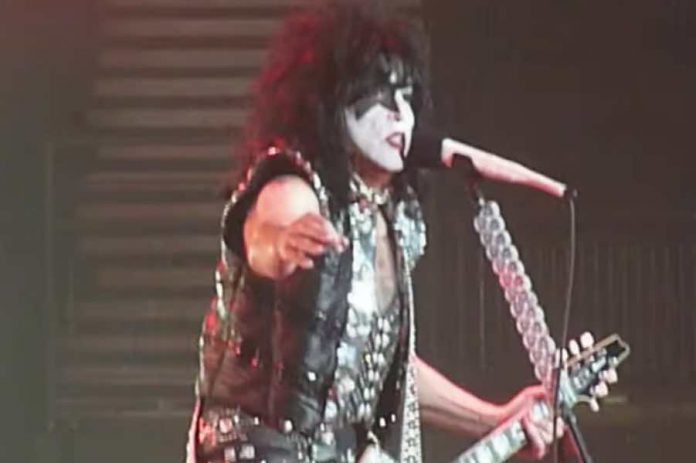 KISS! I wanna rock and roll all night and impersonate every day! That was the theme when this blatant Paul Stanley impersonator took an incredible selfie with baseball and sports legend, Bobby Valentine. We’re pretty sure there is no fooling this Stanley imposter with the genuine article but the attempt was clearly well-received by Valentine, however. You can view the picture below. KISS show ‘absence’ surprises Paul Stanley fans.

In other news revolving Paul Stanley and KISS, fans recently took to social media to discuss the legacy and impact of the group’s debut, self-titled album.

Paul Stanley KISS movie with big name revealed. One fan wrote: “Before KISS was a corporate tag, a phenomenon, a show-stopping headline attraction or an inspiration to countless heavy acts they were in their original incarnation a rock n’ roll band. Four young men from the various boroughs of New York who wanted to conquer the world. They were never the most talented of musicians but they could write songs and became one of rock’s most legendary live acts. Paul Stanley, Gene Simmons, Ace Frehley, and Peter Criss would later fragment into camps, disintegrate, reform and then disintegrate again but at the beginning of it all they were a band of equal partners who all fought in the same direction instead of against each other. In February 1974 after a little less than a year together, KISS released their self-titled debut to critical scorn and audience indifference. However, the years have been extremely kind to `KISS’ in that it is now considered to be a true classic of hard rock and the fountainhead of all that KISS became.”

The fan continued: “More than half of the tracks are not only among the band’s very best but are some of the most influential hard rock songs ever made. “Deuce”, “Strutter”, “Firehouse”, “Cold Gin”, “Nothin’ to Lose”, “100,000 Years” and “Black Diamond” need no further adornment in this humble piece as they have stood the test of time. Not a perfect album; the sound production is a low budget, a mediocre cover (reportedly at Neil Bogart’s request) and a lame instrumental mar the proceedings only slightly. `KISS’ was the kickoff of the masked superheroes climb into rock glory and for many KISS fans; it will always be among their very best.” KISS’ Paul Stanley apologizes for bad remark to women.