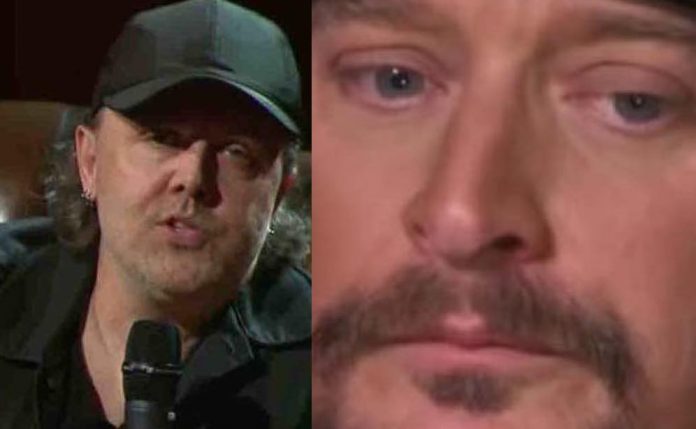 Metallica drummer Lars Ulrich was recently interviewed by Lamont and Tonelli on the radio and it was revealed that he went on a road trip to Lake Tahoe with Kid Rock. Alternative Nation transcribed his remarks. Metallica revealed disappointing Jason Newsted news recently.

The DJ said, “I’ll tell you one of the reasons we love you, we were on the air once, and you gave us a call. You were with Kid Rock driving to Tahoe, and you were rocking with us.”

Ulrich responded, “(Laughs) Of course I do, like it was last week!”

Ghost singer Tobias Forge was recently stunned by an alleged Metallica ripoff. Lars also discussed what he does when he wraps up a tour, “Kind of walk around, not know what to do with myself. It’s called post tour depression. What do I do? I call 9 to try to get an outside line. I just try to chill.”

He was asked if there will be another All Within My Hands acoustic charity show as well.

“Listen, we have our foundation, our foundation is three years old. We’re very proud of what we’ve done with it in three years. Not only in America, but all over Europe and the rest of the world, we’ve really gotten the Metallica fans mobilized and involved in rolling up their sleeves and getting their hands dirty, and helping out in whatever ways they can. 2% of ticket sales to to charities in whatever cities we’re in.

A lot of food banks, a lot of homeless shelters, a lot of places for runaway teens, and a lot of stuff we try to do on a local basis to help out. But it’s kind of fun to have a benefit or a show to get people together, and get them fired up to partake. So we did that coming up on a year ago, and there will definitely be another one, hopefully soon.” Lars Ulrich was recently photographed swimming in a pool looking weird.