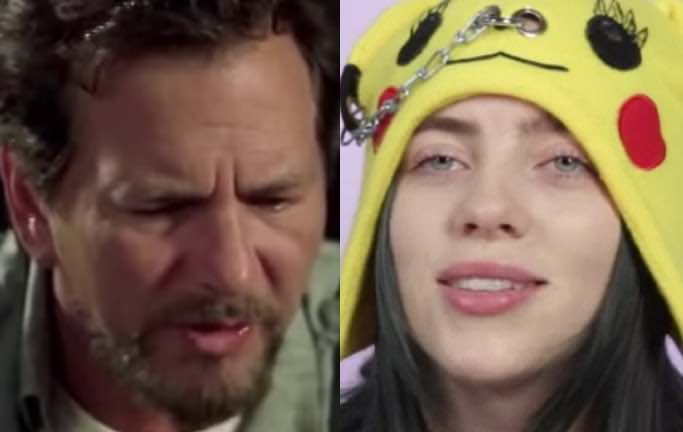 Pearl Jam and Billie Eilish have announced that they will headline Lollapalooza Paris on July 18th and 19th at Hippodrome ParisLongchamp. Eilish ruffled some feathers in the rock community recently, stating on Jimmy Kimmel Live that she had never heard of Van Halen.

Eilish has been a fan and friend though of the 90’s rock community, with Dave Grohl praising her and even covering a song by her with his daughter. Green Day frontman Billie Joe Armstrong did a photoshoot and interview with Eilish for Rolling Stone a couple of months ago as well, so maybe we could see an Eddie Vedder and Billie Eilish team up in Paris? We’ll have to wait and see if we could see a “Bad Guy/Better Man” mashup could take place.

There are also rumors about many of Pearl Jam and Billie Eilish’s spring 2020 tour dates coinciding. Got The Bottle posted on the Ten Club board, “LA Forum open between Billie Eilish and The Eagles..bascially after 4/7 to before Eagles show on 4/17. What about weekend of 4/10-12?” PJNB responded, “San Diego I bet needs to fit in there first after Phoenix which I am guessing is the 9th or 10th. San Diego –> LAX2 –> Oakland makes sense or maybe LA is just one and San Fran fits in after.” CP3Iverson said, “Some Billie Eilish / PJ dates are a few days apart at some cities. Trying to make a double concert trip.”

Pearl Jam fans discussed the band’s summer 2020 European tour in a new Reddit topic. Tenvsvitalogy posted, “It’ll be 10 years since they’ve been to Dublin. I’m happy for everyone who gets to see them this tour but it’s very disappointing and annoying that Ireland misses out again. 25 years in the fan club is feeling more and more like a waste of money these days.”

Puncture-proof wrote, “I feel your pain, was so sure they’d include Dublin this time around, especially given Ed’s relationship with Glen H. But no more than 2018 I’ll just have to hop on a plane and suffer a few days in wonderful Amsterdam (fingers crossed). Might do Hyde Park too, need to sleep on it (and convince the missus)”

Gingerbot responded, “If you don’t like seeing them at festivals, like myself, London and Paris kinda mess up travel as you have 5 days to kill between shows.. now don’t get me wrong there’s plenty of places I’d love to spend five days in EU, but def adds to the price. 3 days on each side of London, ouch.” Adam Sandler made a brutal Eddie Vedder party claim a couple of days ago.