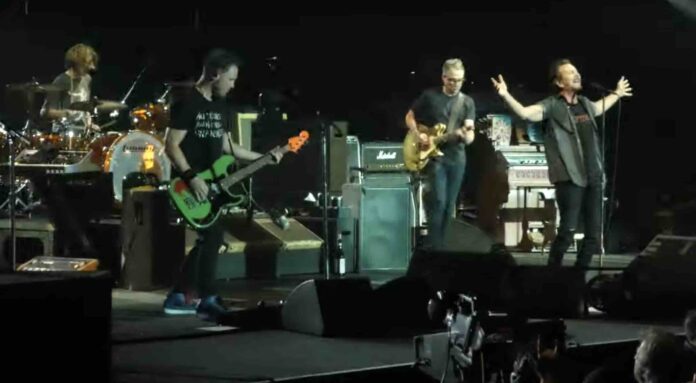 We have some very sad news coming out of the Pearl Jam camp as Matt Cameron has tested positive for the virus that has been sweeping the nation still. With that means that there is a very large seat to fill behind the drum set. Not many can do what Matt Cameron can do. In fact, it’s hard to believe that he can even do what he does as he has not only played for multiple legendary bands, but has come up with some of the best beats that have come out of the alternative rock scene even to this day. Pearl Jam has their connections though and they may have found the right guys for the job. They used a teen drummer named Kai Neukermans from local band The Alive on drums for their second show in Oakland during “Mind Your Manners” as seen below.

A name that all of our readers would find very familiar is Josh Klinghoffer. Not only is Josh known for his fantastic work on the guitar via former instances with the Red Hot Chilli Peppers, but he is also a master at just about all of the main instruments. Taking turns with Oakland, CA based drummer, Richard Stuverud behind the kit during a recent Pearl Jam show, Josh was able to play some of the most loved songs with the band before a fan came up to close out the night with the band.

Lending a helping hand was Richard Stuverud. As stated above, Richard is known and loved in Oakland, CA where his fans, family, and friends have been supporting him heavily. In fact, Richard took to his Facebook page to explain just how happy he was to have the chance to be apart of such a special night.

He states: “It’s difficult to put into words what happened last night as life became incredibly surreal. In all my years of playing drums, playing last nights show for Pearl Jam was the most epic experience I’ve ever had as a musician! I am indeed so incredibly grateful!! And just to think I get to do that again tonight! To Ed,Jeff, Mike, Stone and Josh, I love you! Cheers to Matt for a speedy recovery and a big thank you for your blessing. It’s an honor to step in and deliver the goods. Ok, I am rock ready to keep the rock rolling…with unexplainable primal drumming energy of pure bliss. I live for this!”