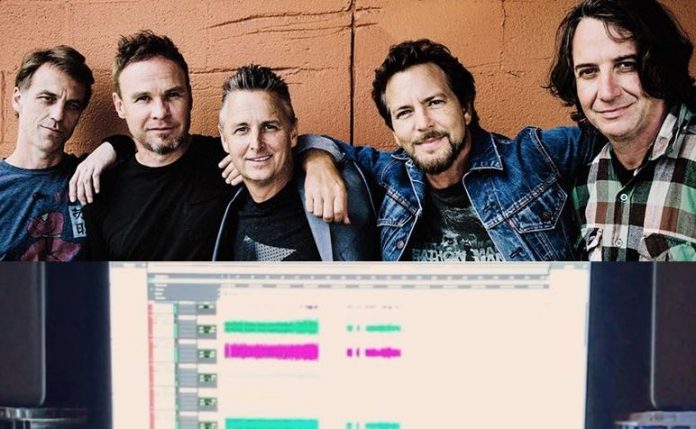 Pearl Jam and Soundgarden drummer Matt Cameron has released a new video teasing a new guitar riff. Fans are speculating in the comments on the Instagram post that it may be for Pearl Jam, but Cameron did release a solo album last year.

While Cameron is a drummer, he is also a very talented songwriter and he’s contributed some great songs to Pearl Jam and Soundgarden’s catalogs. Cameron tagged drummer Mark Guiliana in his post about the video. Watch the video below, and let us know in the comments what you think the riff may be for!

Riff of the day with @markguiliana

Mike McCready invited 5 students, who’d never previously met, to Pearl Jam’s studio for an evening of songwriting and recording. Franky, Sergio, Logan, Rickardo, and Joseph are all current students or alumni of Treehouse, a Seattle-based non-profit dedicated to providing youth in foster care with opportunities to pursue their dreams.

PJ’s touring techs walked the students through setting up the instruments and gear and the sound engineers gave them a step-by-step tutorial of the recording process. Then, Mike handed each student an instrument. Within 2 hours, the group wrote and recorded a song called “Try So Hard,” to be released by HockeyTalkter Records later this year with proceeds benefiting Treehouse for Kids.

“The song just organically happened,” McCready tells Rolling Stone. “We were sitting around, and it was amazing that it came together the way it did. The guys had some rap going on, beat boxing, some guitars, bass and drums. They created a song, and I got to play along with it. It generally doesn’t happen that way, and it was really cool.”

The sense of excitement and eagerness that everyone shared about the song made a big impression on McCready. “People will respond to your honesty in terms of the music you’re creating,” he says. “I could see that in the guys. They all got together for the first time that day, so everybody was on the line a little bit. It’s very nerve-racking, especially for the guys who are still learning. But everybody gave it a shot.”

Rapper Franky Price is featured on the track.