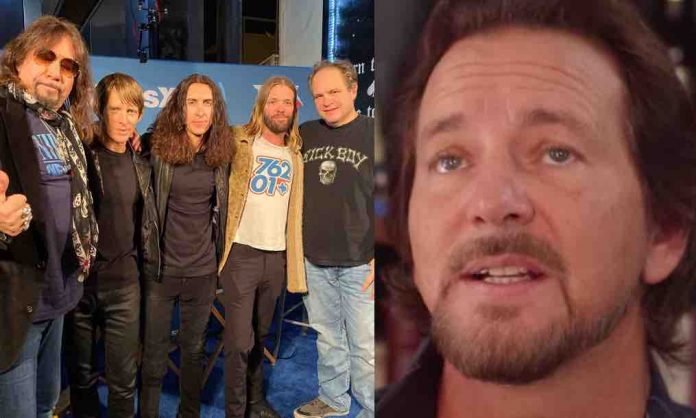 Pearl Jam were disrespected during ex-KISS guitarist Ace Frehley’s recent live interview with Eddie Trunk on his show with Foo Fighters drummer Taylor Hawkins in Hollywood. The live interview show took place at the Rainbow Bar and Grill and aired on SiriusXM. Frehley seemed totally unfamiliar with Pearl Jam and Foo Fighters, wondering if Pearl Jam were part of the New Wave scene, and if Foo Fighters came out before Pearl Jam. A stunning Pearl Jam Saturday Night Live rumor was revealed yesterday.

Taylor Hawkins: “Literally, I was going from whatever was on the radio, which was ‘…oh Mickey you’re so fine, you’re so fine you blow my mind, hey Mickey’ and like The Police and New Wave, and then whatever my mom was listening to on the way to soccer practice, which was like the f**king Eagles or whatever.

I love The Eagles, but I didn’t have a hard rock base when I was first started, it was more New Wave and stuff like that, and then I kind of slowly found Van Halen, slowly went into Queen I and Queen II, and [Led] Zeppelin, and made my way into KISS eventually.

Ace Frehley: Where does Pearl Jam fit in into all of this?

Eddie Trunk: Yeah, that was along time later.

Frehley: I don’t know shit. So these guys were before Pearl Jam?

Ironically, Ace Frehley was wearing a Nirvana Nevermind t-shirt. Ace must have been too busy rock and rolling all night and partying every day to check out Pearl Jam and Foo Fighters in the 90’s! Hawkins mentioned that Chris Shiflett is the biggest KISS fan in Foo Fighters, incorporating licks from the band into his guitar solo spotlight at Foos shows. Foo Fighters recently leaked a massive Pearl Jam announcement.