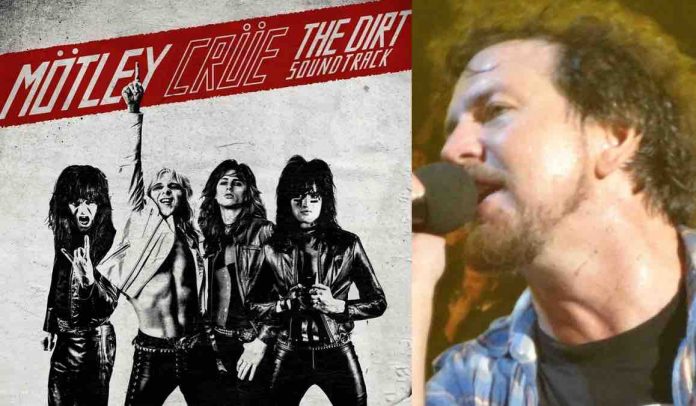 Motley Crue released their biopic ‘The Dirt’ on Friday, and a poster of Pearl Jam’s Ten is used during a major scene in the film. In 1992, Motley Crue are shown at a rehearsal space where it is raining, and this was in the middle of the Grunge explosion, so a Pearl Jam poster is shown outside to signify the change in rock, and in Motley Crue’s career.

The band quickly part ways with Vince Neil, who is avoiding showing up to rehearsal, he then shows up and after a blow up exits the band, leading to John Corabi joining to replace him. Neil looks a lot like Kurt Cobain in future scenes as well, which begin to asthetically mirror the Grunge 90’s after most of the film is spent in the excess of the 80’s. You can watch Motley Crue’s new ‘The Dirt’ film on Netflix.

He tweeted, “The album is number #1.The fans are going crazy over #TheDirt. The critics hate it. ✔️🖤🧨👍🏽 😂💀 @MotleyCrue @netflix WORLD FUCKING WIDE.”

Fans are praising the film, with The Dirt currently sitting at a 7.5 score on IMDB.