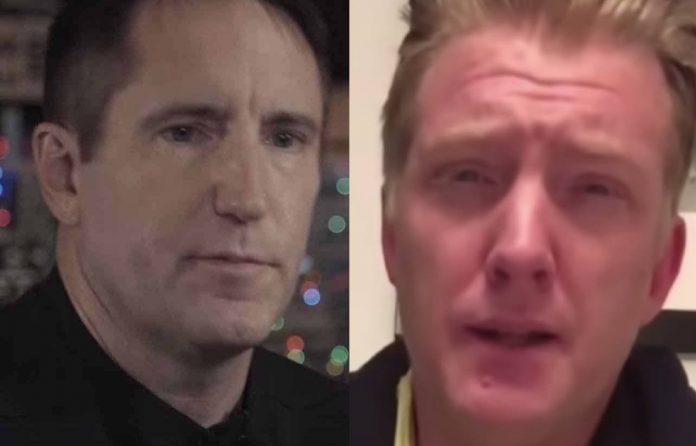 OK, so what can you tell me about Töôrnst Hülpft, if this is a real person?

“Uh, well, [he’s] a strange person that came with Stella that, I guess, they have a mutual friend, and is willing to do something kind of goofy where, in all honesty, when you don’t know somebody, when that’s what came out of his mouth it’s like … As someone that’s a huge fan of Ween, and like I said, that willfulness to do something you know is a bit boneheaded — I just enjoyed that time.”

There’s been speculation on Reddit that it’s a pseudonym for Trent Reznor or Dave Grohl. It’s pretty amusing.

“[Laughs]. Well, I do think that mystery is one of the true joys of this.”

FightClub98 posted on the QOTSA Reddit the original theory about Reznor, “Oh my god, I figured out who Töôrnst Hülpft is…Trent Reznor!!!! Remember the post about the horse a while back!!! Holy F***ing Shit!!!”

Josh Homme made a horrible Queens of the Stone Age hiatus announcement recently. Commander_Butchered posted, “I was hoping for Brent Hinds (Mastodon) on DS 11&12, damnit.

Which Scandinavian acts can be affiliated with Matt Sweeney lately? Homme said in the interview that someone that he thought Matt knew, just walked in and laid the last track? And could it be record label contracts that makes up for the secrecy?”

ThotContagion777 responded, “Tobias Forge? Oh wow, I think you are on to something. I searched for QOTSA on Spotify and Desert Sessions Family playlist was suggested to me… Low and behold, apart from all the usual culprits, the last song on the playlist is from The Hives… OMG, I think Pelle from the Hives is the man, can’t wait to listen to the album. Unless, they worked with Josh before and I somehow completely missed it….”

You can read the full interview at Rolling Stone.