Rage Against The Machine are reuniting for concerts in spring 2020, and while many have speculated that they only reunited for the lucrative Coachella festival offer, posters have started to appear in El Paso, Texas suggesting otherwise.

The posters reveal that the band’s reunion shows are part of a protest against the United States government’s policies at the Mexican border. In the poster, a family is seen approaching the border wall. IrwinElGrande posted some possible venues RATM could play in El Paso on Reddit.

Smallish basketball arena, around 11-12k capacity with center stage, 9k capacity with stage on one end. Metallica recently played here, but it was the smallest show of the tour and pretty darn expensive.

I think this is still way too small for a Rage reunion show, especially since RATM is notorious for doing their shows with affordable ticket prices.

Football stadium, seating capacity is around 50k. Past concerts have had a capacity of around 40k with the stage on one end.

Guns N’ Roses played this venue in 2007 and I heard they had issues selling all tickets.
This sounds more like the venue size that RATM needs for a reunion, especially if they keep tickets affordable. Howard Stern confirmed Rage Against The Machine tour dates yesterday.

This could be an interesting option, the park is located right along the border with Mexico. If you want to make a political statement, this could be the place to do it.
The park already hosts an electronic music festival every year that I think gets 20-25k visitors. I think the park should be able to hold 40-50k total.

Almost the same as above, but this park is right next to the border crossing. It might be a bit more difficult to host a concert there or right next door at Bowie high school, which has an extensive cross-border and political history in the community.
An added benefit is that Juarez also has a Chamizal Park right across this one and perhaps the show could be transmitted at the same time to people in Juarez that are unable to cross the border.

This might throw everyone off, but the park in Juarez right across the border crossing of America’s could be a surprise venue choice. The park already hosts concerts with close to 30k people in attendance and it’s a walkable distance from the international crossing.

What about a surprise venue intended to make a political statement right across the US-Mexico border? There are a few spots where there’s no wall at all and a few places near Sunland Park where you could literally set up a stage that could be viewed from both sides. Zack de la Rocha was photographed at a recent Tom Morello show. 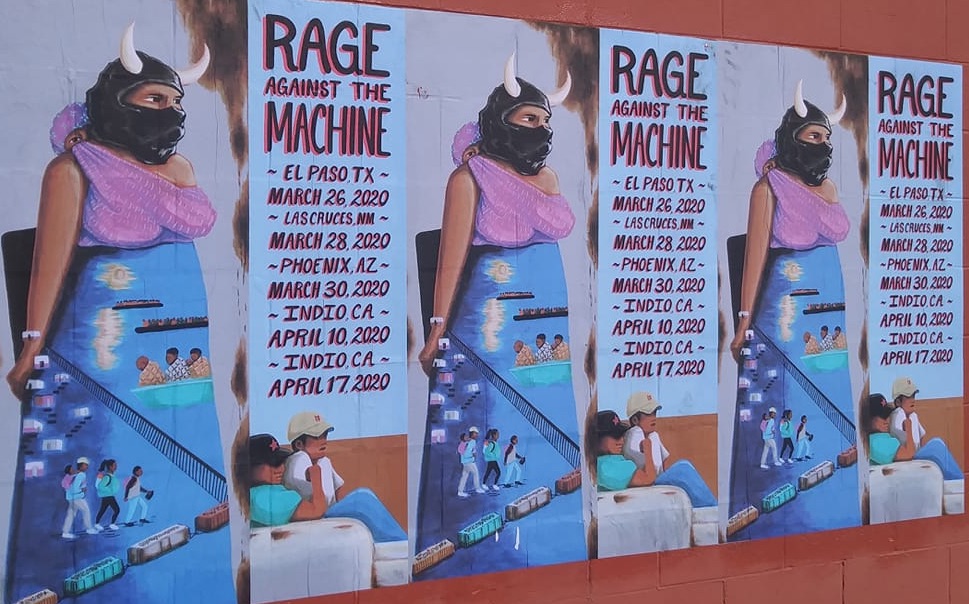