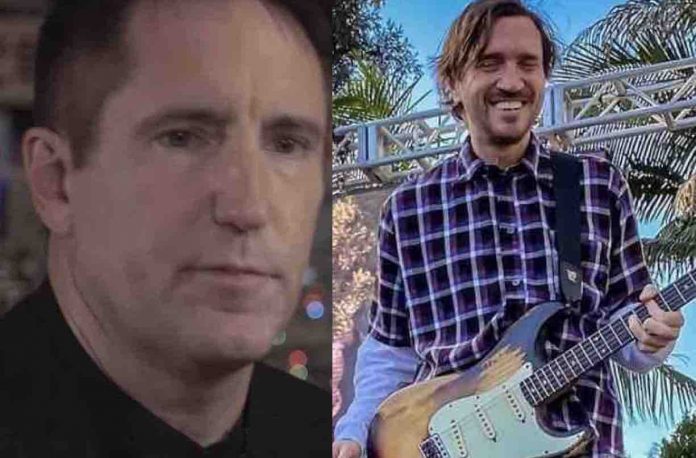 Red Hot Chili Peppers guitarist John Frusciante discussed how electronic music made him lose interest in rock, and how his last tour with Nine Inch Nails helped move him even further that direction in a new Australia radio interview. Alternative Nation transcribed his comments.

“I remember when we went there and we toured with Nine Inch Nails at the Big Day Out, and that was cool. I got to meet Danny Lehner and Charlie Clouser, who both wound up being friends, and got me started in developing as an electronic musician. Danny Lohner was the first person to explain to me how you would have a drum machine playing a synthesizer. I did not know, I thought you went like that on a keyboard or something. Charlie taught me how to use a modulation synthesizer. So that was nice being on tour with them, I was a big fan of them at the time.”

“At that time we were making Californication, I found that electronic music was so inspiring to me, that I made a rule for myself that I can’t listen to electronic music until after rehearsal every day. Because when we were writing our record, if I would start out the day by listening to Depeche Mode or rave music of some type, it made what we were doing at rehearsal seem boring.

So I would force myself to listen to whatever guitar music seemed colorful to me, like Joy Division, Bauhaus, Fugazi, The Yardbirds, there were certain things that seemed just as colorful as electronic music to me. When I went home it was all about Massive Attack and Depeche Mode. I feel that all throughout that last period that I was in the Chili Peppers, electronic music was a big influence on what I was doing, even though it wasn’t super overt.

I was still making guitar music in the band, but I was playing along with a lot of electronic music, and memorizing it a lot. I think it did help as rock music was starting to die, our music still seemed new, and I feel like that’s because I was being influenced by things that were new at the time. Whereas another rock band was just maybe listening to Led Zeppelin or The Beatles, I was listening to all kinds of stuff.”