Sergiootaegui posted on the RHCP Reddit about the band’s possible 2021 plans, “”BSSM 30 Year Anniversary 2021 – Anything New or Special coming? Anyone know or any guess on something special coming for the BSSM 30 year anniversary next year? I’m not super versed in what might be in the vault regarding recordings. Curious if there might be some kind of new vinyl or deluxe version, maybe merch. It’s always sounded incredible so no need for a remaster.

Personally, I’d love the release of a ton of ‘Funky Monks’ footage, like drop everything filmed, that’d be so awesome, or maybe we’ll just get a new album.”

AaronianKenrod responded, “I love the band, but there’s quite a disconnect between what they could do and what they do. Not knocking them of course, it’s just a shame to see a band like Metallica constantly putting out amazing versions of their material and know we’ll never get that sorta stuff.

Remember when the official website covered a fake story about Flea playing bass for The Faces? Remember the complete lack of official word when John quit in 2008/9 and he had to write a blogpost clarifying? Remember their odd announcement on Instagram only that John had rejoined this time last year?

I know this sounds ungrateful, and I appreciate that. They don’t owe us anything. It just frustrates me sometimes.” 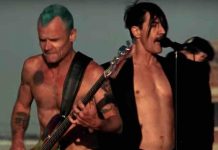