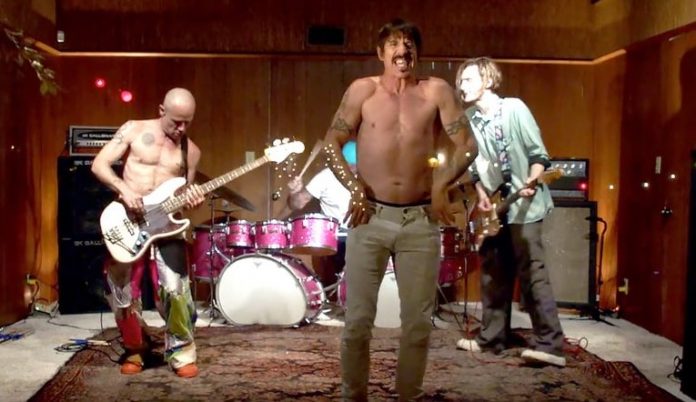 Red Hot Chili Peppers guitarist Josh Klinghoffer attended multiple World Series games at Dodger Stadium over the weekend as the Los Angeles Dodgers choked in epic fashion against the Boston Red Sox. After an epic 18-inning victory on Friday brought the series to 2-1, the Dodgers choked away a 4-0 lead in Game 4 on Saturday, and were beaten on Sunday 5-1 in the decisive Game 5, with the Boston Red Sox being crowned World Champions.

Klinghoffer was spotted at the games in the screencaps seen below, and looked less than thrilled with his favorite baseball team’s lackluster performance. In the first photo he is seen behind the man wearing a red hat, and in the second photo he is behind the man in the Dodgers hat and the guy yawning. Klinghoffer had a better time though at the games than his bandmate Anthony Kiedis recently had at a Los Angeles Lakers basketball game. Kiedis was temporarily escorted off the court after yelling obscenities at Chris Paul.

You can view the photos below of Klinghoffer witnessing the Los Angeles Dodgers lose the World Series for the second year straight. They have not won the World Series since 1988, before John Frusciante’s first album with RHCP was even released!