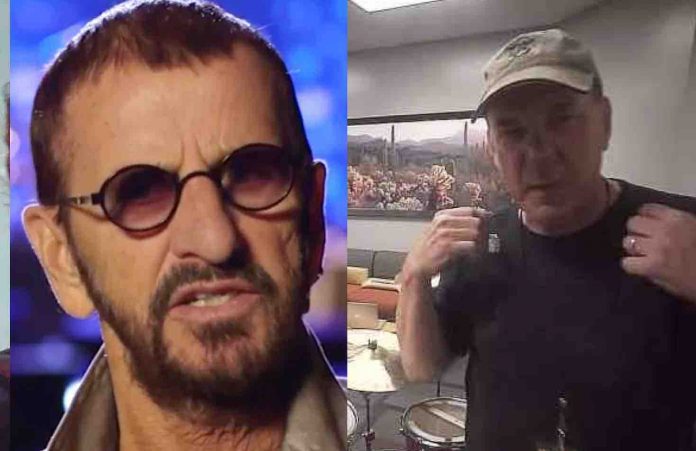 Music photographer Rob Shanahan recently discussed late Rush drummer Neil Peart in a new interview with Minnesota Drummer. Here, Shanahan reveals what separated the performer from the person and also discussed how he did a photoshoot of Peart weeks apart from another music legend, iconic drummer for the Beatles – Ringo Starr. John Bonham ‘disrespected’ Neil Peart before Rush death.

Shanahan told the outlet: “A few years ago when my dad was visiting from Minnesota, I brought him along to my photo shoots for a few weeks. One of them was with Neil (another was with Ringo). It was really cool introducing my idols to my dad, who bought me my first drum kit. And Neil was extremely kind and gracious. My dad watched in amazement as Neil played this incredible drum groove with mallets on a 5-piece DW drum kit. Neil later wrote about it on his web blog, titled Autumn Serenade. My dad has some of this session on video!” Rush employee reveals if Neil Peart ‘gave up’ before death.

The acclaimed music photographer then went into detail about the last time he spoke to Peart saying: “On the last tour when Rush was in the Twin Cities, I reached out to Neil to ask if he was doing a meet and greet. My brother TJ, also a drummer, was dying to meet him. He said he doesn’t do meet and greets but asked if my brother would like a ticket “upgrade”. So Neil had tickets at Will Call for my brother, who enjoyed the show from the tenth row dead center on the floor. That was Neil. What a guy.”

IBTNJohn posted on TheRushForum.com recently, “I can’t explain the depth of his influence on me. Obviously, things like the sticks I use to play, the DW and Roland drums I chose, the snare sound I prefer, the lyrics I write. But there’s much more. The philosophy I’ve read. Numerous friendships and friend circles directly and indirectly caused by a shared love of Rush’s music, or Neil’s words. Including some of you. Late night discussions over the real meaning of a song like “Grand Designs” or what we would say to him if we ever did meet him. “Driven” was my theme song in the mid-90’s and it fueled some permanent changes in my life.

You can read the full interview at Minnesotadrummer.