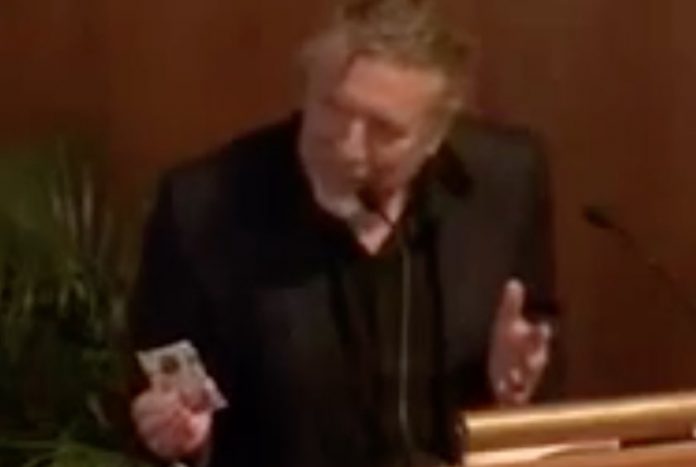 Led Zeppelin frontman Robert Plant revealed that he was stiffed from a concert payment by agent Rod MacSween in the 1970’s at a recent University of Exeter event honoring MacSween, and MacSween finally gave him a paltry £10 paycheck. Plant came onstage to get the money, and quipped that it wasn’t enough, but added that it was “great sharing my adventures with you.” Michael Jackson’s family recently revealed a stunning Robert Plant photo.

MacSween was elected Students’ Guild social secretary at University of Exeter, studying statistics and chemistry. He booked Robert Plant’s ‘Band of Joy’ for a concert while serving in that position at school. He now represents some of the biggest names in music like Guns N’ Roses, Aerosmith, Ozzy Osbourne, Pearl Jam, Tool, KISS, and The Who.

Professor Sir Steve Smith said about MacSween at the ceremony, “From the beginning of his career Rod developed a reputation as a shrewd and unflappable negotiator who showed huge loyalty to his clients, with whom he has built strong and lasting friendships.

“Rod’s career has been a story of exponential success, with very few bumps in the road, testimony to his outstanding talents as businessman and leader of global company.”

A Led Zeppelin icon recently described a disturbing car accident. Jimmy Page recently shared rare photos from a 1966 performance with The Yardbirds. He wrote on social media, “On this day in 1966, The Yardbirds were based in LA when we played in Santa Barbara as a four piece. This gives a good opportunity to show some rarely seen photos.⁣⁣”

He also recently wrote, “Led Zeppelin began their North American tour in Vancouver, Canada on 19th August 1971 but started in the US at the LA Forum on this day – this being the first of two nights. I remember a standing ovation from a good percentage of the audience after Stairway to Heaven – this was quite remarkable as we were touring this material from an album not to be released until three months later.⁣” Robert Plant’s surprising secret Led Zeppelin replacement discussed rehearsing with the band in the past in a new interview.