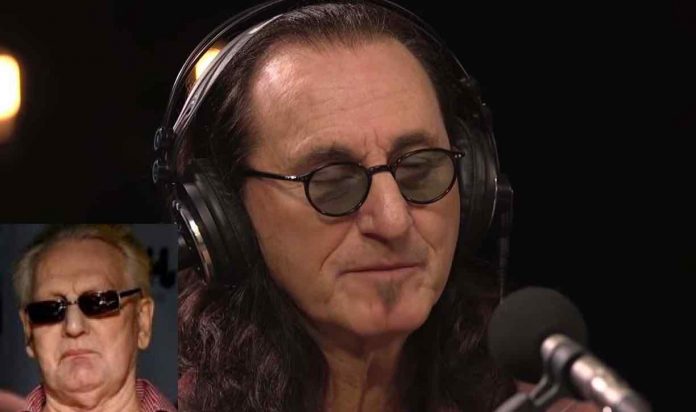 From The Beatles icon Paul McCartney to now, Rush‘s Geddy Lee has replied to the news on Baker’s passing. As previously reported Ginger Baker, one-third of the popular classic rock band Cream passed away this Sunday. With Baker’s untimely passing the makes guitarist-vocalist Eric Clapton as the only surviving member of rock and roll’s legendary alliance.  This Rush member confirmed a tragic loss last week. Lee took to social media via Instagram to post the memory of Cream and offer his sincere condolences’ to Baker’s family, friends and fans. A Rush member recently announced surgery after this health scare.

You can ready the Rush icon’s statement below:

Geddyimages
As a young musician few drummers stood taller or were a bigger musical influence than Ginger Baker…I will never forget the awesomeness of seeing him perform with Cream at Massey Hall on June 5, 1968, alongside the late great Jack Bruce and Eric Clapton. He was one of Rock’s first virtuoso drummers and his incredible legacy lives on. Sincere condolences to Ginger’s family, friends, and fans.
📷: Nash the Slash
Massey Hall June 5, 1968

In other news regarding Rush and Ginger Baker, fans on the official Rush Facebook page posted their sympathies regarding the passing of Mr. Baker.

“These people that dress up in spandex trousers with all the extraordinary makeup – I find it incredibly repulsive, always have. I’ve seen where Cream is sort of held responsible for the birth of heavy metal. Well, I would definitely go for aborting [laughs]. I loathe and detest heavy metal. I think it is an abortion. A lot of these guys come up and say, “Man, you were my influence, the way you thrashed the drums.” They don’t seem to understand I was thrashing in order to hear what I was playing. It was anger, not enjoyment – and painful. I suffered on stage because of that [high amplifier] volume crap. I didn’t like it then and like it even less now. That whole Rock And Roll Hall Of Fame thing – at least half the people in there don’t have a place in any kind of hall of fame anywhere, in my opinion.” G.BAKER”

Chris put: “Mad as a mad dog dad, but brilliant, given the stuff he must have ingested over the years, liquid and dust, 80 is not a bad shot sir. A sad loss.“

Victor said: “He was a composer as well as a percussionist and his music and legacy which is timeless will live on forever. Condolences to family and friends that loved him and RIP.“

Subhasish stated: “RIP Mr. Baker. May God pour all his blessings for the great contribution to the rock drumming! Heaven will now enjoy your performance !!”