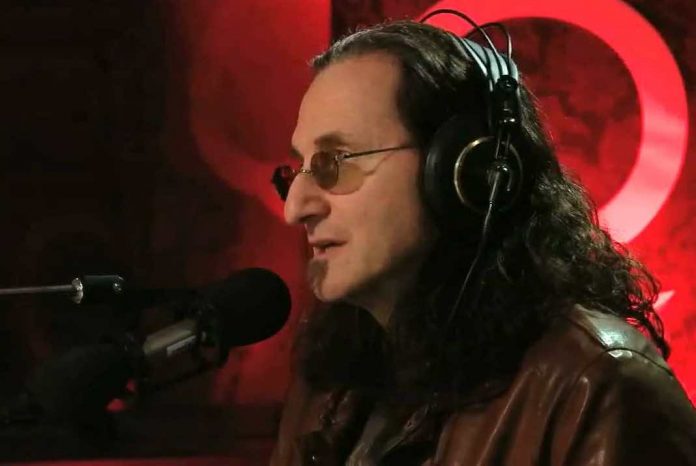 Rush drummer Neil Peart recently from cancer last week, and Geddy Lee had to keep the disease a secret when a fan told him his friend had terminal cancer last year at a book signing, though his response may have been telling when it comes to his mindset at the time. Geddy Lee wearing woman’s clothing was revealed in a photo yesterday.

Ladirushfan80 posted on TheRushForum.com, “Hello Rush family…I’m still at a total loss for words. I’m surprised not surprised at how this news has effected not just me, but so many of us fans.

It was a long time friend and fellow member here that informed me of the news via text. it was a picture of Neil with the words below it that said RIP Professor. my reply was WHAT ???????? Immediately searched on my phone and found what he was talking about… 🙁
Stunned. disbelief. tears flowed. Blindsided. I guess for me that’s why it hit me so hard. Didn’t see it coming.

I recently lost a friend / fellow fan to cancer. He was a member here on TRF. Known the man for 30+ years and it was our shared fandom that brought us together. In my small town when i was a kid not many people were fans, or at least not huge fans like he and I. It was an instant bond that spanned many years and many tours.

In July last year when it became known that Danny was losing his battle to cancer i found out that Geddy was coming to Detroit for a book signing. I immediately thought of Danny and bought a book for him for Geddy to sign. I knew it would make his day as Geddy has always been his favourite member of the band.

At the book signing Geddy asked who Danny was. I explained he is a long time friend and fellow fan who was battling Cancer and is unable to make this event so i took it upon myself to do this for him. Geddy looked at me and said “You are a good friend”. I mailed the book to Danny (he was living in Florida at the time) and he called me as soon as he received the signed book. Danny passed a couple of weeks later.

Little did I know then what i know now… he was losing a friend to cancer as well…After all these years since becoming a fan of this band, i’ve carried them – the lyrics the music with me in every aspect of my life. I feel like a part of me has died.

I am amazed at the outpouring of so many beautiful tributes have been written, performed and posted online. So much love to my Rush family in our time of grieving and healing…” Neil Peart’s last public words when dying to Geddy Lee were just revealed.