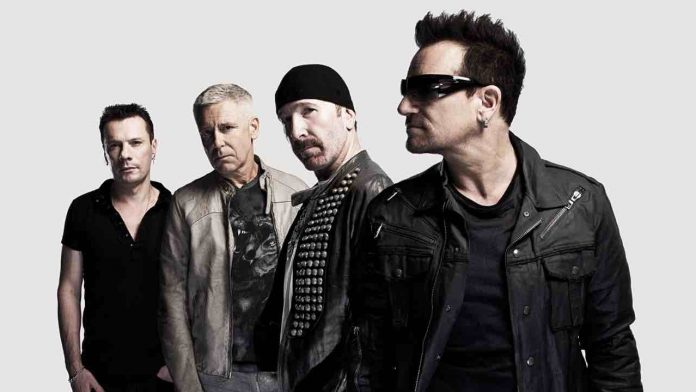 U2 singer Bono recently posted a backstage video of their wardrobe to Twitter, mulling over what to wear during their first ever concert in India. “Counting down to our first ever show in India. Now, what to wear…. #u2 #thejoshuatreetour2019 #mumbai #DYPatilStadium” Bono ‘begging’ for prayers was just revealed.

In other news, Bono’s son, Eli Hewson, is now the frontman of a band named Inhaler. Their latest single, “Ice Cream Sundae”, is an insanely catchy post-punk tune that will please fans of U2 and The Killers. The band recently spoke to NME, where Eli talked about his father’s different songwriting from his. U2 member ‘threatened’ at party, was Bono wasted?

“To this day, there’s a conspicuous fact that follows Inhaler around everywhere they go – singer Eli’s dad is Paul Hewson. You’ll probably know Hewson Snr. better as Bono – sunglasses affinado, and the lead singer of Ireland’s most successful band. Constantly being mentioned in the same breath as his dad doesn’t bother Eli: instead he grabs the opportunity to poke a bit of fun at his old man at the very first opportunity.

“People our age don’t know who U2 are,” he declares. “They don’t care. I’m not dissing him or anything, but he’s had his moment,” he laughs, before looking concerned. “I say that he’s had his turn jokingly,” he footnotes, backpedaling slightly. “That can’t be the headline,” he adds cracking a grin, “or I’ll get a hiding when I get home.”

“He’ll get the belt out,” snorts drummer Ryan McMahon

“People always ask: do you get really good advice from your dad about music and songwriting, and the honest truth is …no!” Eli picks up. “Yeah, they’re a really successful band, but I have completely different opinions on songwriting to him.” “I’ve never heard of ‘em,” retorts Ryan.

Read more at NME. The band’s debut will be coming in 2020. U2 singer Bono spends ridiculous money on car.