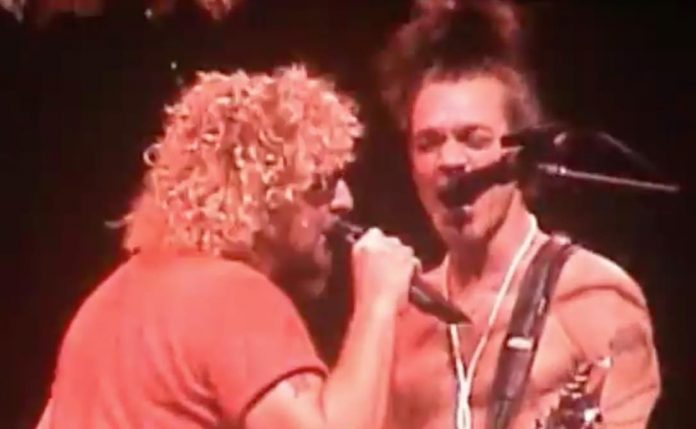 Eddie Van Halen has been done touring and recording for over four years now, and Sammy Hagar has just revealed why without Eddie around, great things like the two of them performing together don’t happen anymore. Hagar leaked a painful video with Eddie Van Halen recently.

Hagar recently wrote about his 1985 Farm Aid performance with Eddie, “I just watch this, it’s blowing my mind! That’s some really good energy going on there! Shit like that don’t happen much anymore.”

Sammy Hagar recently discussed producing his new album with The Circle ‘Space Between’ himself. Hagar said, “Normally, I get criticized by a lot of producers, because I’ll go in and I’ll do three vocal takes. I know my lyrics when I go in. I’m not reading lyrics when I’m in the studio, because you’ve got to study your songs so when you sing it, you can mean it. You’ve got to be telling the story. I’ve got my stuff together when I walk into the studio… A lot of guys [will ask], ‘Just give me one more.’

I go, ‘Why? I’d rather be doing something else.’ This time, I didn’t do that. I tortured myself… I honestly didn’t feel like trying to explain what was in my head to anyone, so I went in and started doing it myself… I could see the vision. When you can see light at the end of the tunnel, when you have an idea that you can see to the end of it and you see the whole picture, you’ve got to go to work to do it, but I saw that, and I heard it in my head and I was ready. I’m really happy with it. I’m satisfied — the first time I’ve ever had a record that I don’t listen to now and go, ‘Oooh, I could’ve sang that one more time.'”

Sammy Hagar and the Circle are set to go on their most extensive North American tour yet in summer 2020, with at least 40 dates around July and August, and according to the latest rumors, they’ll be joined by some big names on the road. Van Halen fans can also check out David Lee Roth opening for KISS on their North American 2020 ‘End of the Road’ tour. Michael Anthony just dropped a new Van Halen singer bombshell.