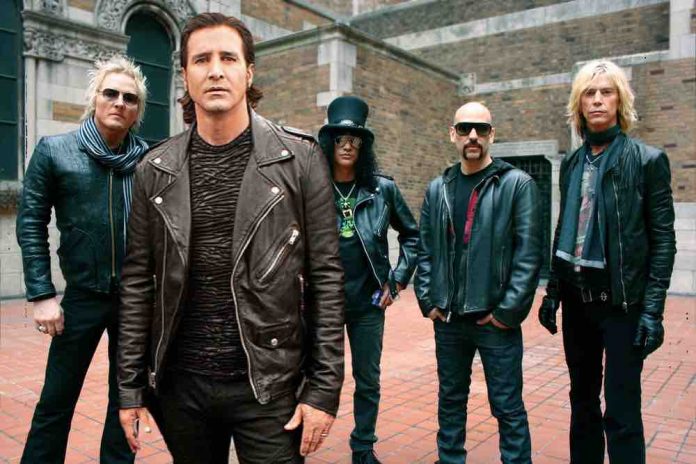 Former Creed frontman Scott Stapp replaced the late Scott Weiland in the supergroup
Art of Anarchy before leaving himself, but many have wondered if Velvet Revolver ever reached out to him out during their singer searches. The first time Velvet Revolver sought out a singer was in 2002/2003 when they formed the band, with Scott Weiland being hired in spring 2003.

Velvet Revolver then fired Weiland in April 2008 when he rejoined Stone Temple Pilots, and they secretly tried out new singers for the next few years including Corey Taylor, but never ended up hiring anybody, with a one off reunion with Weiland in January 2012 being their swan song before Weiland’s December 2015 death.

On a new episode of Appetite for Distortion with Brando, Stapp was asked if he had ever secretly auditioned for Velvet Revolver. Alternative Nation transcribed remarks from the show.

Brando first asked about a photo of Stapp with Slash, Mark Tremonti, and Myles Kennedy that surfaced online years ago.

Stapp said, “I crossed paths with Slash years ago at the Sunset Marquis back in probably 1998ish. Then I can’t remember every situation, but I bumped into him here and there in passing. Then of course the photo that you saw. But it was always, ‘Hey, how are you?’ Nothing beyond that.

But he’s a musical icon, a legend, and I have much respect and admiration for the work he has done, and the legacy he has left in music. I’m a big fan of Guns N’ Roses man.”

Brando then mentioned the idea of Stapp fronting Velvet Revolver, but it seems like that never came close to happening, “Velvet Revolver, they tried finding a new lead singer, before Scott [Weiland] passed, but when he was fired.