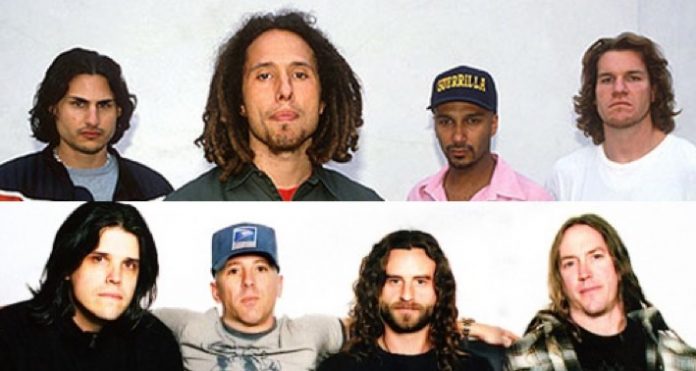 Rage Against The Machine guitarist Tom Morello confirmed that next year is the 40th anniversary of his supergroup with Tool guitarist Adam Jones. Morello recently honored another 90’s rock legend, Scott Weiland.

Morello tweeted, “Next year will be the 40th anniversary of The Electric Sheep, the Libertyville, Illinois high school punk band featuring myself & Adam Jones of @Tool.” Could we see a reunion performance? We’ll have to wait and see!

Morello also is releasing a new book titled ‘Tom Morello: Whatever It Takes.’ The description states, “As the cofounder and guitarist of Rage Against the Machine, Audioslave, and Prophets of Rage, and as a solo artist and collaborator with artists as diverse as Bruce Springsteen and Wu-Tang Clan, few musicians have been as groundbreaking as Tom Morello. Now, for the first time, Morello’s remarkable life as a guitarist, songwriter, singer, and political activist is captured in Whatever It Takes.”

“Signed limited edition. Pre-order your copy from this limited edition of only 2,000 numbered copies, each signed by Tom Morello. Presented in a Solander box, the edition includes an exclusive 7″ vinyl and a Little Red Songbook, a booklet of songs and chord charts from The Nightwatchman.”

A fan Juliet tweeted Morello about another recent release of his, “@tmorello Tom Morello’s “Speaking Truth to Power through Stories & Song” on Audible lifted me up like nothing else has in a very long time. It’s full of the intelligence, art, heart & soul needed for an epic soundtrack to the powerful soul-led movements rising up across America.”

Morello responded, “Thank you.” Rage Against The Machine released photos without Tom Morello a couple of weeks ago.

Next year will be the 40th anniversary of The Electric Sheep, the Libertyville, Illinois high school punk band featuring myself & Adam Jones of @Tool pic.twitter.com/PIzUGQi0oK