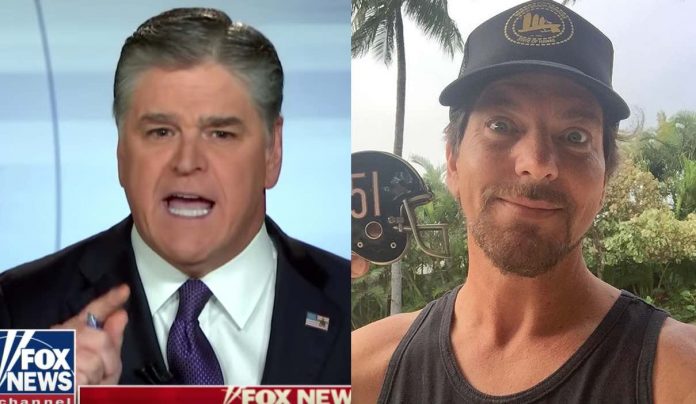 On Sean Hannity’s Fox News program ‘Hannity’ this week, the conservative commentator ripped Pearl Jam for their depiction of President Trump’s death in a poster for a show in Missoula in support of Democrat Senator Jon Tester. Alternative Nation transcribed his remarks. Hannity discussed the poster with an on screen graphic that said ‘The Left Goes Low,’ seemingly in reference to former First Lady Michelle Obama’s comment a couple of years ago where she said, ‘When they go low, we go high.’

“Now of course what segment on America’s left would be complete without an overt threat to the President of the United States. Take a look, this poster from the band Pearl Jam, which shows the skeletal remains of what appears to be a dead President Trump outside a burning White House. While Pearl Jam apparently wants the President to go down in flames, most Democrats will settle for impeachment.”

“The role of artists is to make people think and feel, and the current administration has us thinking and feeling,” Ament tells Rolling Stone. “I was the sole conceptualist of this poster, and I welcome all interpretations and discourse. Love, from the First Amendment, Jeff Ament.”